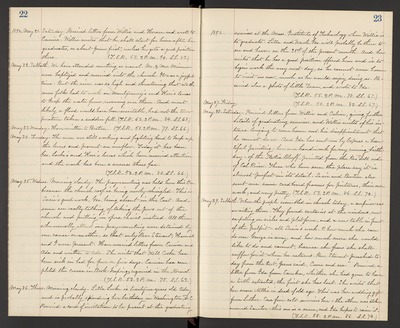 May 22. Sabbath. We have attended meeting as usual. Mr. & Mrs. Minner were baptized and received into the church. It was a joyful time. But the river was so high and threatening that all the men folks had to work on Montgomery's and Kerr's levers to keep the water from running over them. And most likely a flood would have been inevitable, had not the temperature taken a sudden fall. (T.S.R. 62. 2 P.M. 84. S.S. 68.)

May 24. Tuesday. The men are still working and fighting hard to keep up the levers and prevent an overflow. Today it has been Geo. Locke's and Kerr's levers which have received attention and the work has been a success thus far. (T.S.R. 52. 2 P.M. 80. S.S. 66.)

May 25. Wednes. Morning cloudy. The prayermeeting was held here this P.M. because the church roof is being newly-shingled. This is Susie's good work, Geo. being absent in the East. And some are really talking of taking the pews out of the church and putting in opera chairs instead. All those who usually attend our prayermeeting were detained by one cause or another. so that only Rev. Stewart, Hannah and I were present. Have received letters from Eunice and Ada and written to Ada. She writes that Will Cooke has been sick in bed for four or five days. Eunice has completed the course in Book-Keeping, required in the Normal. (T.S.R. 52. 2 P.M. 75. S.S. 62.)

May 26. Thurs. Morning cloudy. Lilla Locke is twenty one years old today and is probably spending her birthday in Washington, D.C. Received a card of invitation to be present at the graduating

1892. exercises at the Mass. Institute of Technology when Willie is to graduate. Lilla and Uncle Geo. will probably be there to see and hear- on the 31st of the present month. And he writes that he has a good position offered him and is to begin work the very next day, so he cannot come home to visit us now, much as he would enjoy doing so. Received also a photo of little Dean, and wrote to Ida. (T.S.R. 55. 2 P.M. 78. S.S. 67.)

May 28. Saturday. Received letters from Willie and Calvin, giving further details of graduating exercises, and Willie writes of his intense longing to come home and his disappointment that he cannot do so. And Ida has sent me by Express a beautiful painting - her own handiwork for my coming birthday - of the Scotia Bluff, painted from the Rio Dell side of Eel River. Those who have seen the place say it is almost perfect in its detail. Susie and Benton also sent me some card board frames for pictures, their own work, and very pretty. (T.S.R. 53. 2 P.M. 86. S.S. 72.)

May 29. Sabbath. When the people assembled in church today, a surprise was awaiting them. They found curtains at the windows, new carpeting on aisles and platform, and a new table in front of the pulpit - all Susie's work. O how much she can do now George is away, and how much more she would like to do and cannot, because she fears she shall suffer for it when he returns. Rev. Stewart preached today from the text, "Jesus said, Come and see." Received a letter from Ida from Eureka, whither she had gone to have a tooth extracted, the first she has lost. She writes that her mare Nellie is dead of old age. This was her wedding gift from Luther. One fine colt survives her - the other was stolen named Senator - this one is a mare, and Ida hopes to raise it. (T.S.R. 58. 2 P.M. 86. S.S. 74.)