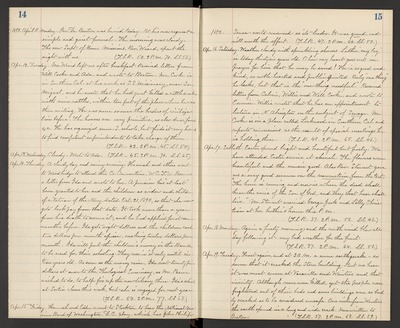 Apr. 12. Tuesday. Mr. Wiard left us after breakfast. Received letters from Will Cooke and Ada, and wrote to Boston. Mr. Cooke is in Southern Cal. at his work as S.S. Missionary, near San Miguel, and he wrote that he had just killed a rattle snake with nine rattles, within ten feet of the place where he was then writing. He was never so near the borders of civilization before. The houses are very primitive, as also dress, food D.C. He has organized some S. schools, but finds it very hard to find competent superintendents to take charge of them. (T.S.R. 42. 2 P.M. 65. S.S. 58.)

Apr. 14. Thurday. A cloudy and rainy evening. Hannah and others went to Woodbridge to attend the Co. Convention, W.C.T.W. Received a letter from Ida and wrote to her. A pension has "at last" been granted to her and the children as widow and children of a Veteran of the Navy, dated Oct.21,1890, so that she now gets back pay from that date. It took more than a year from his death to secure it, and he had applied for it some months before. Ida gets eight dollars and the children each two dollars per month apiece, making twelve dollars per month. Ida will put the children's money in the Bank to be used for their schooling. They receive it only until sixteen years old. As soon as the money came, Ida sent twentyfive dollars at once to the Theological Seminary, as Mr. Pascoe wished to do, to help fix up the new library there. Ida's school at Scotia closes this week, but she is engaged for next year. (T.S.R. 50. 2 P.M. 77. S.S. 63.)

Apr. 15 Friday. Hannah and Eddie went to Stockton to hear the National Marine Band of Washington, D.C. play, which has John Philip

Apr. 16. Saturday. Weather cloudy with sprinkling showers. Luther "my boy" is today thirtysix years old. O how my heart goes out in prayer for him that he may be saved! He is so good and kind, so noble-hearted and public-spirited. Only "one thing" he lacks, but that is the "one thing" needful". Received letters from Calvin, Willie and Will Cooke, and wrote to Eunice. Willie writes that he has an appointment to lecture in N. Abington on the subject of sewage. Mr. Cooke is in a place called Lockwood in Southern Cal. and reports conversions as the result of special meetings he is holding there. (T.S.R. 40. 2 P.M. 65. S.S. 48.)

Apr. 17. Sabbath. Easter opened bright and beautiful but frosty. We have attended Easter service at church. The flowers were beautiful and the music good. Also Rev. Stewart gave us a very good sermon on the resurrection, from the text, "The hour is coming and now is when the dead shall hear the voice of the Son of God, and they that hear shall live". Mr. Stewart married George Jack and lilly Christian at her brother's house this P.M. (T.S.R. 37. 2 P.M. 58. S.S. 48.)

Apr. 19. Tuesday. Frost again, and at 3 A.M. a severe earthquake - so severe that it cracked the Store building. But we hear it was most severe at Vacaville and Winters and that vicinity. Although none were killed, yet the people were frightened out of their beds and some buildings were so badly cracked as to be considered unsafe. One mile from winters the earth opened in a long and wide crack. Have written to Boston. (T.S.R. 37. 2 P.M. 68. S.S. 59.)