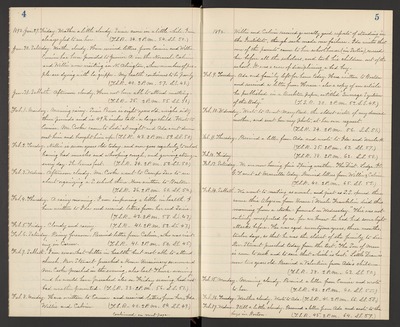 Jan. 30. Saturday. Weather cloudy. Have recieved letters from Eunice and Willie. Eunice has been promoted to Junior A in the Normal. Calvin and Willie were visiting in N. Abington, where numbers of peo- ple are dying with la grippe. My health continues to be poorly (T.S.R. 40. 2 P.M. 57. S.S. 48.)

Feb. 7. Sabbath. I am somewhat better in health but not able to attend church. Rev. Stewart preached a Home Missionary sermon and Mr. Cooke preached in the evening, also last Thurs. evening and he would have preached also on Friday evening, had not bad weather prevented. (T.S.R. 32. 2 P.M. 56. S.S. 51.)

1892. Willie and Calvin received generally good reports of standing in the Institute, though each made one failure. Ida writes that one of the parents came to her school house (in Scotia), cursed her before all the scholars, and took his children out of the school. it was a case of disciplining a bad boy.

Feb. 14. Sabbath. We went to meeting as usual, and just as S.S. opened there came this telegram from Horace: "Uncle Franklin died this morning from a stroke - funeral on Wednesday. " This was not entirely unexpected by us, for we knew he had had some light attacks before. He was aged seventyone years, three months, twelve days, so that he was the eldest of the family to die. Rev. Stewart preached today from the text,"The Son of Man is come to seek and to save that which is lost." Little Dean is now two years old. Received a Valentine from Ada's children. (T.S.R. 38. 2 P.M. 63. S.S. 50.)