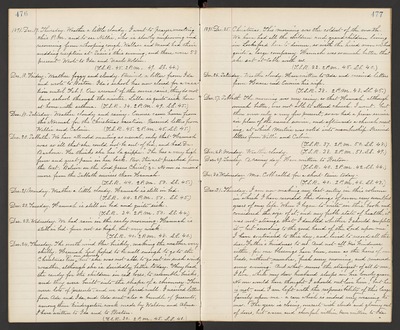 1891. Dec. 17. Thursday. Weather a little cloudy. I went to prayermeeting this P.M. and to see Nellie, who is slowly improving and recovering from whooping cough. Wallace and Maud had their wedding reception at Susie's this evening, and there were 53 present. Wrote to Ida and Uncle Holden. (T.S.R. 45. 2 P.M. 49. S.S. 44.)

Dec. 18. Friday. Weather foggy and cloudy. Received a letter from Ida and wrote to Boston. Ida's school has now closed for a vacation until Feb.1. On account of the severe rains, they do not have school through the winter, Lilla is quite sick here at home with asthma. (T.S.R. 34. 2 P.M. 49. S.S. 45.)

Dec. 20. Sabbath. We have attended meeting as usual, only that Hannah was so ill that she could not be out of bed, and had Dr. Barbour. He thinks she has "la grippe". She has a very high fever and great pain in her back. Rev. Stewart preached from the text, "Believe on the Lord Jesus Christ", &.c. No one is missed more from the Sabbath services than Hannah. (T.S.R. 44. 2 P.M. 50. S.S. 45.)

Dec. 24. Thursday. The north wind blew briskly, making the weather very chilly. Hannah had hoped to be well enough to go to the Christmas tree in our church, but she was not able to go out in such windy weather, although she is decidedly better today. They had the candy for the children in red boxes, to resemble bricks, and they were built into the shape of a chimney. There were lots of presents, and we all faredwell. I received letters from Ada and Ida, and Ada sent also a bundle of presents, among them kindergarten work made by Weldon and Alma. I have written to Ida and to Boston. (T.S.R. 30. 2 P.M. 45. S.S. 40.)

Dec. 27. Sabbath. The morning was very rainy, so that Hannah, although much better, was not able to attend church. I went, but there were only a very few present, so we had a praise service in place of the usual service, and afterwards a church meeting, at which Mertice was voted into membership. Received letters from Willie and Calvin. (T.S.R. 37. 2 P.M. 50. S.S. 48.)

Dec. 31. Thursday. I am now making my last entry in this volume in which I have recorded the doings of seven very eventful years of my life. When I began to write in this book and considered the size of it, and my feeble state of health, it was not strange that I doubted whether I should complete it, but "according to the good hand of the Lord upon me" I have continued to this day, and lived to record all the dear Father's kindness to us. And not all His kindness either, for our blessings have been, even as the hairs of our heads, without number, "fresh every morning, and renewed every evening". And what seems the strangest of all to me, I live, while my dear husband sleeps in his lonely grave. No one would have thought I should out live him, but he is not, and I am left with the responsibility of this large family upon me - a care which is indeed very wearing to me. The year is closing, overcast with clouds and gloomy out of doors, but warm and cheerful within. Have written to Ida.