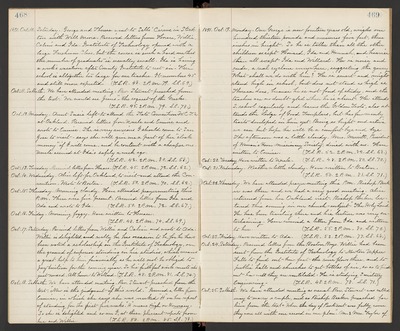 1891. Oct. 10. Saturday. George and Theresa went to Sell's Circus in Stockton with Will Moore. Received letters from Horace, Willie, Calvin and Ida. Institute of Technology opened with a large Freshman Class, but the course is such a hard one that the number of graduates is usually small. Ida is having a week's vacation after County Institute to rest in. Her school is altogether too large for one teacher. It numbers 45 and still more expected. (T.S.R. 48. 2 P.M. 79. S.S. 69.)

Oct. 12. Monday. Aunt Susie left to attend the State Convention W.C.T.U. at Oakland. Received letters from Uncle and Eunice and wrote to Eunice. She is very anxious I should come to San Jose to visit - says she will give me a part of her "clock money" if I will come, and be content with a cheaper one. Uncle arrived at Ida's safely a week ago. (T.S.R. 42. 2 P.M. 80. S.S. 68.)

Oct. 17. Saturday. Received letters from Willie and Calvin and wrote to Ada. Willie is delighted, and really he has occasion to be, for he has been voted a scholarship in the Institute of Technology, on the ground of superior standing in his studies, which means a great help to him financially as he will not be obliged to pay tuition for the coming year. So his faithful work meets its just reward. All honor to Willard. (T.S.R. 48. 2 P.M. 81. S.S. 74.)

Oct. 18. Sabbath. We have attended meeting. Rev. Stewart preached from the text, "New is the judgement of this world." Received a letter from Eunice, in which she says she was marked "H" on her report of standing for the first five weeks. "H" means High or Honorary. So she is delighted and so am I, at these pleasant reports from her and Willie. (T.S.R. 50. 2 P.M. 85. S.S. 78.)

1891. Oct. 19. Monday. Our George is now fourteen years old, weighs one hundred thirteen pounds and measures five feet, three inches in height. So he is taller than all the other children except Howard, Ida and Hannah, and heavier than all except Ida and Willard. He is noisy and rude, a real cyclone everywhere, suggesting the query "What shall we do with him?" He is smart and might stand high in school, but does not stand as high as Theresa does, because he is not fond of study, and the teachers are no doubt glad when he is absent. He attends S. school regularly and learns the Golden Texts, also attends the Lodge of Good Templars, but has few manly traits developed in him yet. Being so bright and active we can but hope he will be a comfort bye and bye. The afternoon was a little cloudy. Mrs. Merritt, President of Woman's Home Missionary Society, dined with us. Have written to Eunice. (T.S.R. 52. 2 P.M. 82. S.S. 68.)

Oct. 22. Thursday. We have attended prayer meeting this P.M. Bishop Becker was there and we had a very good meeting. Alice returned from her Oakland visit. Bishop Becker lectured this evening in our church-subject - "The Holy Land". He has been traveling there and his lecture was very entertaining. Have received a letter from Ida and written to her. (T.S.R. 55. 2 P.M. 80. S.S. 70.)

Oct. 24. Saturday. Received letters from the Boston Boys. Willie had been sent from the Institute of Technology to Newton Upper Falls to find out how fast the river flows there, and to public hall and churches to get bottles of air, so as to find out how well they are ventilated. He is studying Sanitary Engineering. (T.S.R. 48. 2 P.M. 78. S.S. 71.)

Oct. 25. Sabbath. We have attended meeting as usual. Rev. Stewart was called away to marry a couple, and so Bishop Becker preached for him from the text - "When the day of Pentecost was fully come they were all with one accord in one place". Mr. & Mrs. Taylor of