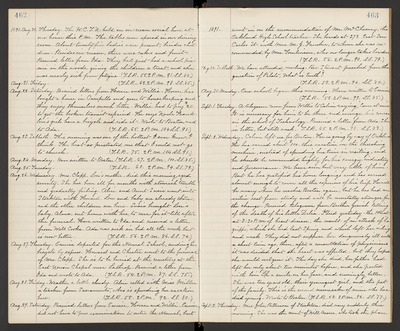 1891. Aug. 20. Thursday. The W.C.T.U. held an ice cream social here at our house this P.M. The tables were spread in our dining room. About twentyfive ladies were present, besides children. Besides ice cream, there were cakes and fruit. Received letter from Ida. They had just had a school picnic in the woods, giving the children a treat, and she was nearly sick from fatigue. (T.S.R. 55. 2 P.M. 91. S.S. 83.)

Aug. 22. Saturday. Received letters from Horace and Willie. Horace has bought a house in Campello and gone to housekeeping and they enjoy themselves much better. Willie had to pay $20. to get the broken transit repaired. He says Uncle Franklin's girls have a bicycle and ride it. Wrote to Boston and to Ada. (T.S.R. 65. 2 P.M. 104. S.S. 91.)

Aug. 26. Wednesday. Mrs. Clapp, Lou's mother, died this morning aged seventy. She has been ill for months with stomach trouble and gradually failing. Alice and Aunt Susie went into Stockton with Howard. Lou and baby are already there, and the other children are here. Susie brought Lou's baby, Alma, out home with her, to care for it till after the funeral. Have written to Ida and received a letter from Will Cooke. Ada was sick in bed all the week but is now better. (T.S.R. 56. 2 P.M. 86. S.S. 74.)

Aug. 27. Thursday. Eunice departed for the Normal School, sending her bicycle by express. Howard and Chester went to the funeral of Mrs. Clapp. She is to be buried at the cemetery at the East Union Chapel near Lathrop. Received a letter from Ida and wrote to Ada. (T.S.R. 54. 2 P.M. 87. S.S. 75.)

Aug. 29. Saturday. Received letters from Eunice, Horace and Willie. Eunice did not have to pass examination to enter the Normal, but

Sept. 2. Wednesday. Calvin left us for Boston. He is going by way of Oakland. He has earned about $100. this vacation on the threshing machine, instead of spending his time in visiting, and he should be commended highly for his energy, industry and perseverance. We have seen but very little of him. But he has gratified his home longings and has earned almost enough to cover all the expenses of his trip. He will be weary when he reaches Boston again, but he has had an entire rest from study and will be mentally stronger for the change. Received telegram from Brother Josiah telling of the death of his little Delia. She died yesterday - the 1st inst. at 3:30 P.M. of heart disease, the result of an attack of "la grippe", which she had last Spring, and which left her ailing and weak. They did not suppose her dangerously ill until a short time ago, then, after a consultation of physicians it was decided that the heart was affected, but they hoped she would outgrow it. The day she died, her father had left her only about ten minutes before, and she parted with him with a smile on her face, and seemingly better. She was ten years old, their youngest girl, and the pet of the family. This is the second namesake of mine who has died young. Wrote to Boston. (T.S.R. 58. 2 P.M. 92. S.S. 77.)

Sept. 3. Thursday. Mrs. John Patterson of Stockton, died very suddenly this morning. She was the Aunt of Will Moore, who took the place