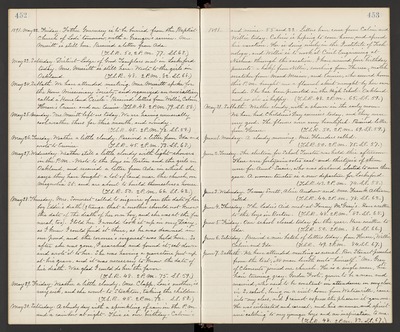 May 24. Sabbath. We have attended meeting. Mrs. Merritt spoke for the Home Missionary Society, and organized an auxiliary called a "Homeland Circle". Received letters from Willie, Calvin, Horace's Eunice and our Eunice. (T.S.R. 48. 2 P.M. 79. S.S. 58.)

May 27. Wednesday. Weather still a little cloudy with light showers in the P.M. Wrote to the boys in Boston and the girls in Oakland, and received a letter from Ada in which she says they have bought a lot of land near the church, on Magnolia St. and are about to build themselves a house. (T.S.R. 50. 2 P.M. 66. S.S. 62.)

May 28. Thursday. Mrs. Somerset called to inquire of me the date of her boy Eddie's death (strange that a mother should not know that date of the death of her own boy, and she was at the funeral, too). I told her I would look it up in my Diary, as I knew I could find it there, as he was drowned in our pond, and the coroner's inquest was held here. So after she was gone, I searched and found it, sat down and wrote it to her. She was having a gravestone put up at his grave, and it was necessary to know the date of his death. Was glad I could do her the favor. (T.S.R. 48. 2 P.M. 75. S.S. 59.)

May 30. Saturday. A cloudy day with a sprinkling of rain in the P.M. and a rainbow at night. This is our birthday, Calvin's

1891. and mine - 55 and 22. Letters have come from Calvin and Willie today. Calvin is hoping to come home and spend his vacation. He is doing nicely in the Institute of Technology, and Willie is to work at Civil Engineering at Nashua through the vacation. I have received four birthday presents - a hdkf. from Nelli, couching from Theresa, match scratcher from Maud Misner, and Eunice, who arrived home this P.M. brought me a flannel skirt wrought by her own hands. She has been promoted in the High School, - Oakland and so she is happy. (T.S.R. 48. 2 P.M. 65. S.S. 59.)

June 2. Tuesday. The election for School Trustee was held this afternoon. There were forty nine votes cast and thirtysix of them were for Aunt Susie, who was declared elected to serve three years. A woman trustee is a new departure for Lockeford. (T.S.R. 43. 2 P.M. 74. S.S. 58.)

June 7. Sabbath. We have attended meeting as usual. Rev. Stewart preached from the text, " No man liveth unto himself." Mr. Gray of Clements joined our church. He is a single man, his hair turning gray. Gordon Foote, grown to be a man and married, who used to be constant in attendance on my class in S. school, being on a visit home from Watsonville, came into my class, and I cannot express the pleasure it gave me, He was interested and earnest, and his manner and spirit were "catching" to my younger boys and an inspiration to me. (T.S.R. 48. 2 P.M. 83. S.S. 67.)