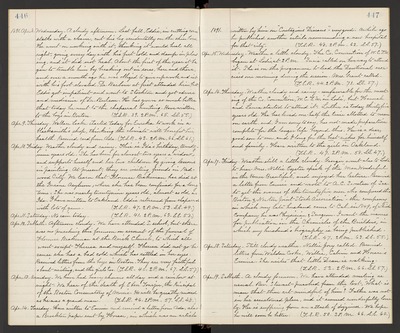 1891. Apr. 8. Wednesday. A cloudy afternoon. Last fall, Eddie, in cutting corn stalks with a clever, cut his leg accidentally on the shin bone. He went on working with it, thinking it would heal all right, going every day with his feet cold and damp in plowing, and it did not heal. About the first of the year it began to trouble him by breaking out in sores, here and there, and over a month ago he was obliged to give up work and sit with his foot elevated. Dr. Barbour at first attended him, but Eddie got impatient and went to Stockton and got advice and medicine of Dr. Bulson. He has grown so much better that today he went to the chaparral hunting. Have written to the boys in Boston. (T.S.R. 39. 2 P.M. 65. S.S. 55.)

Apr. 10. Friday. Weather cloudy and rainy. This is Ida's birthday, twentynine years old. She has been for almost two years a widow, and supports herself and her two children by giving lessons in painting. At present, they are visiting friends in Redwood City. We learn that Florence Brakeman has died at the Insane Asylum, where she has been confined for a long time. She was nearly twenty nine years old, almost as old as Ida. I have written to Oakland. Eddie returned from chaparral with lots of game. (T.S.R. 47. 2 P.M. 53. S.S. 49.)

Apr. 12. Sabbath. Afternoon cloudy. We have attended S. school, but there was no preaching this forenoon on account of the funeral of Florence Brakeman at the Brick Church, to which all went except Theresa and myself. Theresa did not go because she has a bad cold which has settled in her eyes. Received letters from the boys in Boston. They are very faithful about writing, and the girls too. (T.S.R. 40. 2 P.M. 67. S.S. 57.)

Apr. 14. Tuesday. Have written to Eunice and received a letter from Ada, also a Brockton paper sent by Horace, in which was an article

Apr. 16. Thursday. Weather cloudy and rainy, unfavorable for the meeting of the Co. Convention, W.C.T.U. in Lodi, but Hannah and Laura started to attend it. Luther is today thirty five years old. He has lived one half the time allotted to man on earth, and, I am sorry to say, has not made preparation complete for the longer life beyond this. He is a dear, good son to me, and I long for the best riches for himself and family. Have written to the girls in Oakland. (T.S.R. 47. 2 P.M. 58. S.S. 47.)

Apr. 17. Friday. Weather still a little cloudy. Georgie went also to Lodi to hear Mrs. Nellie Eyster speak of the "Man Wonderful in the House Beautiful", and enjoyed her lecture. Received a letter from Eunice and wrote to A.C. Sweetser of Sac. to get the names of the twenty five men who composed the "Boston & Newton Joint Stock Association" the company in which my late husband came to Cal. in 1849, of which Company he was Physician & Surgeon. I want the names for publication in the "Chronicles of the Builders", in which my husband's biography is being published. (T.S.R. 47. 2 P.M. 63. S.S. 55.)

Apr. 19. Sabbath. A cloudy forenoon. We have attended meeting as usual. Rev. Stewart preached from the text, "What is man that thou art mindful of him?" Father was not in his accustomed place, and it seemed wonderfully lonely. He is suffering from an attack of dizziness. We hope he will soon be better. (T.S.R. 50. 2 P.M. 66. S.S. 60.)