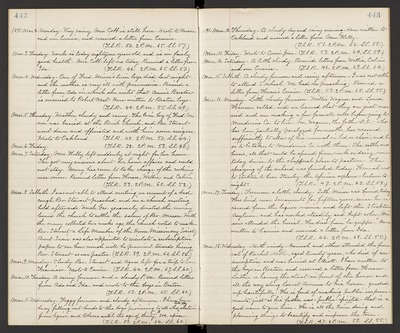 Mar. 4. Wednesday. One of Fred. Miner's twin boys died last night and the mother is very ill with pneumonia. Received a letter from Ada in which she writes that Annie Barstow is married to Robert West. Have written to Boston boys. (T.S.R. 44. 2 P.M. 55. S.S. 49.)

Mar. 7. Saturday. Mrs. Kelly left suddenly at night for her home. She got very anxious about her home affairs and could not stay. Mary has come to take charge of the cooking once more. Received letters from Horace, Willie and Calvin. (T.S.R. 33. 2 P.M. 60. S.S. 52.)

Mar. 8. Sabbath. I was not able to attend meeting on account of a bad cough. Rev. Stewart preached and in a church meeting held afterwards. Uncle Geo. generously donated the money loaned the church to settle the salary of Rev. Mason. With the money collected two weeks ago, the church voted to make Rev. Stewart a Life Member of the Home Missionary Society. Aunt Susie was also appointed to circulate a subscription paper to see how much will be promised towards hiring Rev. Stewart as our pastor. (T.S.R. 39. 2 P.M. 64. S.S. 56.)

Mar. 16. Monday. Little cloudy forenoon. Willie Wagner and Laura Hansen called, and we learned that they are just married and are making a few farewell calls before going to Mendocine Co. to live. Mr. Wagner, the father R.O. who has been partially paralyzed for months, has recovered sufficiently to allow of his removal in bed or chair, and he is to be taken to Mendocine Co. with them. The cattle and horses, all that could be spared from work or dairy, were today driven to the chaparral place to pasture. The spraying of the orchard was finished today. Hannah went to Stockton to hear Stanley the African explorer lecture tonight. (T.S.R. 47. 2 P.M. 63. S.s. 58.)

Mar. 17. Tuesday. Forenoon a little cloudy. Seth Miner was buried today. Has lived near Sacramento for fifteen years, since he recovered from the liquor mania and left the Stockton Asylum, and has worked steadily and kept sober. His sons attended the burial. he died from "la grippe." Have written to Eunice and received a letter from Ida. (T.S.R. 46. 2 P.M. 63. S.S. 55.)

Mar. 18. Wednesday. North windy. Hannah and others attended the funeral of Rachel Noble, aged twenty years, who died of consumption and was buried at Elliott. I have written to the boys in Boston and received a letter from Horace, Luther is having the street in front of the house and all the way along Locust Avenue to his house, graded up beautifully. he is fond of making public improvements, just as his father was public spirited that is a good name to give him. He is all the time doing and planning things to beautify and improve the town. (T.S.R. 47. 2 P.M. 58. S.S. 55.)