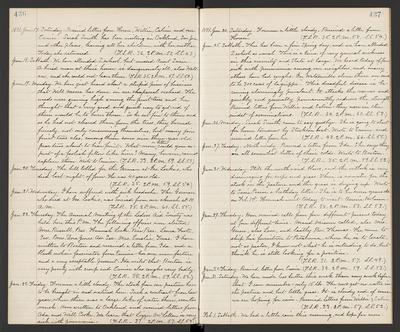 Jan. 19. Monday. We have just heard about a stupid piece of business that Will Moore has done in our chaparral orchard. The weeds were growing high among the fruit-trees and he thought that a very good and quick way to get rid of them would be to burn them. So he set fire to them and as he had not cleared them from the trees, they burned fiercely, not only consuming themselves, but many fine fruit trees also, among them some nice three-year-old pear trees about to bear fruit. What more or better could you expect of a foolish fellow like him? Money, however, cannot replace them. Wrote to Eunice. (T.S.R. 33. 2 P.M. 59. S.S. 53.)

Jan. 23. Friday. Forenoon a little cloudy. The stock from our pasture have to be brought in and watered here. Such a contrast from last year, when there was a large lake of water there, even too much. Have written to Oakland and received letters from Ada and Will Cooke. We learn that Lizzie McLellan is very sick with pneumonia. (T.S.R. 37. 2 P.M. 57. S.S. 52.)

Jan. 25. Sabbath. This has been a fine Spring day, and we have attended S. school as usual. This is a time of very general sickness in this vicinity and State at large. We heard today of four sick with pneumonia among our neighbors, and many others have bad coughs. In Watsonville alone there are said to be 300 cases of "la grippe". This dreadful disease is becoming alarmingly prevalent. It attacks the nerves and quickly and generally permanently reduces the strength. Received letters from Willie and Calvin, they were in the midst of examinations. (T.S.R. 34. 2 P.M. 60. S.S. 53.)

Jan. 28. Wednesday. Still the north wind blows, and the outlook is very discouraging for crops and grass. There is no water for the stock in the pasture and the grass is drying up. Wrote to Susie Pascoe a birthday letter. She is to be seven years old on Feb. 1st. Hannah went today to visit Annie Holman. (T.S.R. 38. 2 P.M. 58. S.S. 53.)

Jan. 29. Thursday. Have received calls from four different persons today at four different times. Maud Misner called, also Mrs. Green, also Lou, and lastly Rev. Thomas. He came to ship his furniture to Petaluma, where he is to locate, not as pastor. I know not what he is intending to do, but think he is still looking for a position. (T.S.R. 31. 2 P.M. 57. S.S. 49.)

Jan. 31. Saturday. We have made less butter this week than any week before that I can remember - only 15 lbs. The cows get no water in the pasture and but little grass. It is cloudy and of course we are hoping for rain. Received letters from Willie & Calvin. (T.S.R. 33. 2 P.M. S.S 52.)

Feb. 1. Sabbath. We had a little rain this morning, and hope for more.