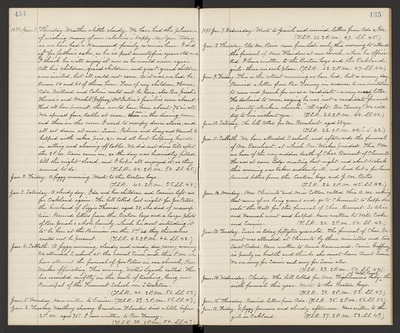 1891. Jan. 1. Thursday. Weather a little cloudy. We have had the pleasure of wishing many of our relatives a "Happy New Year" today, as we have had a Hammond family re-union here. I did it for father's sake, as he is past seventyfive years old and I think he will enjoy it now as he would never again. All his children, grand children, and great-grand children were invited, but all could not come. As it was, we had between 50 and 60 of them here. Four of my children, Horace, Ada, Willard and Calvin could not be here, also Bro. Josiah's Horace's and Mabel (Geffroy) McIntire's families were absent. Had all been present, there would have been about 75 in all. We spread four tables at once, one in the dining-room and three in the room I used to occupy down stairs, and all sat down at once. Susie, Rebecca and Lucy and Hannah G. helped with cakes, pies, &.c. and all lent helping hands in setting and clearing off tables. We did not dine till after the 2 P.M. train came in, so the day was hurriedly filled till the night closed, and I hope all enjoyed it, as they seemed to do. (T.S.R. 42. 2 P.M. 50. S.S. 45.)

Jan. 3. Saturday. A cloudy day. Ida and her children and Eunice left us for Oakland again. The bell tolled last night for Joe Peters, the husband of Lizzie Thomas, aged 38, who died of consumption. Received letters from the Boston boys and a large photo of Bro. Josiah's whole family. which he sent intending it to be here at the Reunion on the 1st, as they themselves could not be present. (T.S.R. 43. 2 P.M. 46. S.S. 42.)

Jan. 4. Sabbath. A foggy morning, cloudy and windy day, rainy evening. We attended S. school at the usual time, and this P.M. we have attended the funeral of Joe Peters in our church, Rev. Wickes officiating. This evening, Willis Lynch called. He has ascended swiftly in the scale of teaching, being now Principal of the Fremont School in Stockton. (T.S.R. 40. 2 P.M. 56. S.S. 55.)

Jan. 9. Friday. This is the coldest morning we have had, but a sunny day. Received a letter from Rev. Tenney in answer to our invitation to come and preach for us a candidate - a very sorry letter. He declined to come, saying he was "not a candidate for such a poverty-stricken church". All right, Bro. Tenney! We will try to live without you. (T.S.R. 26. 2 P.M. 44. S.S. 42.)

Jan. 11. Sabbath. We have attended S. school, and afterwards the funeral of Mr. Barnhart, at which Rev. Wickes presided. This P.M. we hear of the very sudden death of Chas. Bamert of Clements. He was at some Lodge meeting last night, and about 1 o'clock this morning was taken suddenly ill, and lived but a few hours. Received letters from the Eastern boys and J.M. Bates. (T.S.R. 26. 2 P.M. 45. S.S. 42.)

Jan. 12. Monday. Mrs. Clements and Miss Cotton called this A.M. asking that some of us bring greens and go to Clements to help decorate the Hall for the funeral of Chas. Bamert. So Alice and Hannah went and helped. Have written to Will Cooke and Eunice. (T.S.R. 28. 2 P.M. 50. S.S. 43.)

Jan. 13. Tuesday. Susie is today fiftytwo years old. The funeral of Chas. Bamert was attended at Clements by three ministers and two Secret Orders. Have written to Anna Hammond. Carrie Geffroy is poorly in health and thinks the must leave Aunt Susie. We are sorry for Carrie and sorry for Susie also. (T.S.R. 29. 2 P.M. 50. S.S. 44.)