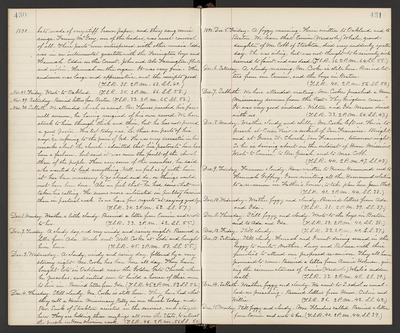 1890. hats made of very stiff brown paper, and they sang comic songs. Fanny McGary, one of the leaders, was most comical of all. Their parts were interspersed with other music. Eddie was in an instrumental quartette with the Farrington boys and Hannah. Eddie on the Cornet, John and Abe Farrington, flute and violin. Hannah on the organ. It was very fine. The audience was large and appreciative, and the receipts good. (T.S.R. 35. 2 P.M. 68. S.S. 60.)

Nov. 30. Sabbath. We attended church as usual. Rev. Thomas preached his farewell sermon, he having resigned of his own accord. We have stuck to him through thick and thin, but he has not proved a good pastor. His text today was, "Lo, these are parts of his ways," &.c. referring to the power of God. He was very sarcastic in his remarks about the church - admitted that his pastorate here had been a failure, but said it was more the fault of the church than of the people. The were some of the members, he said, who wanted to lead everything. Well, we feel as if with him it has been necessary to go ahead and do, or things would not have been done. Also we feel that he have somewhat mistaken his calling. He seems more interested in poultry business than in pastoral work. So we have few regrets at saying goodbye. (T.S.R. 34. 2 P.M. 63. S.S. 57.)

Dec. 3. Wednesday. A cloudy, windy and rainy day, followed by a very stormy night. Mr. Cooke has been here all day. They have bought lots in Oakland near the Golden Gate Church where he preaches, and intend soon to build a house of their own to live in. Received letter from Ida. (T.S.R. 45. 2 P.M. 53. S.S. 52.)

Dec. 4. Thursday. Still cloudy. Mr. Cooke is still here. They have had what they call a Home Missionary Rally in our church today, and Rev. Sink of Stockton assisted in the services, and stayed here. They are holding these meetings all over the State, to interest the people in Home Mission work. (T.S.R. 46. 2 P.M. 56. S.S. 50.)

Dec. 13. Saturday. Still cloudy. Hannah and I went driving around in the buggy to invite, Mother, Lucy and Rebecca with their families to attend our proposed re-union. They all have promised to come. Received a letter from Annie Holman, giving the circumstances of Eunice (Wardrobe) Whale's sudden death. (T.S.R. 33. 2 P.M. 45. S.S. 39.)