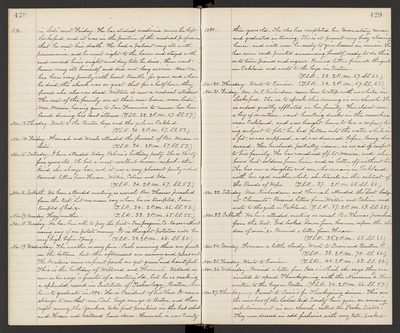 1890. in Lodi next Friday. He has studied medicine since he left Lockeford, and it was in the practice of the medical profession that he met his death. he had a patient very ill with pneumonia, and he went right to the house and stayed with and nursed him night and day till he died, then went home very ill himself and did not long survive. Mrs. M. has been very poorly with heart trouble for years, and when he died, the shock was so great that for a half-hour they feared she also was dead. Wilton is now a medical student. The rest of the family are at their new home near Lodi, Mrs. Mason having gone to San Francisco to nurse her husband during his last illness. (T.S.R. 32. 2 P.M. 67. S.S. 57.)

Nov. 15. Saturday. I have attended today Rebecca's birthday party. She is thirty four years old. She had a most excellent dinner superb - the kind she always has, and it was a very pleasant party indeed. Received letters from Horace, Willie, Calvin and Ida. (T.S.R. 34. 2 P.M. 67. S.S. 57.)

Nov. 19. Wednesday. The weather is very fine. Each morning there are frosts on the bottom, but the afternoons are sunny and pleasant. The Madeira vines on front porch are yet green and beautiful. This is the birthday of Willard and Hannah. Willard is now as he says "a quarter of a century" old, but he is making a splendid record in Institute of Technology, Boston, where he is to graduate in 1892. He is President of his Class. It seems strange to me that our Cal. boys can go to Boston, and these right among the Yankees, take first positions in the best schools and Horace and Willard have done. Hannah is now twentythree

1890. years old. She also has completed her Conservatory course and graduated in tuning. She is at present very busy cleaning house, and will soon be ready to give lessons in music. She has some cards printed announcing herself ready to do this or to tune pianos and organs. Received letters from all the girls in Oakland and wrote to the boys in Boston. (T.S.R 33. 2 P.M. 67. S.S. 60.)

Nov. 21. Friday. Mr. M. E. Richardson came here to stop with us while in Lockeford. She is to speak this evening in our church. She is indeed greatly afflicted in her family. Her eldest son, a boy of seventeen, went hunting ducks in the marshes near Oakland, and was brought home to her a corpse; being subject to fits, he had fallen into the water while in a fit, as was supposed, and was drowned before being discovered. Her husband, partially insane, is no aid of comfort to his family. He has wandered off to Mexico, and she hears but seldom from him, and is better off without him. She has now a daughter and son, who remain in Oakland with her aged mother, while she travels in the interest of the Bands of Hope. (T.S.R. 37. 2 P.M. 65. S.S. 60.)

Nov. 27. Thanksgiving. I went to Susie's for Thanksgiving dinner. This eve the members of the Ladies Aid Society have given an amusing entertainment in our church, called the "Peake Sisters". They were dressed in odd fashions, with very tall, peaked