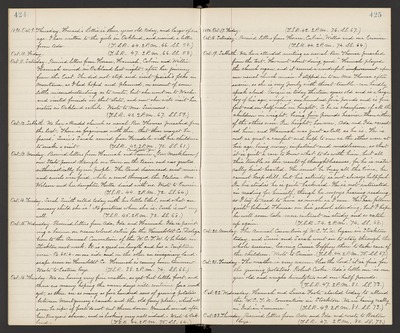 Oct. 11. Saturday. Received letters from Horace, Hannah, Calvin and Willie. Hannah arrived in Oakland last night, after her journey from the East. She did not stop and visit Josiah's folks in Montana, as I had hoped and planned, on account of some little misunderstanding as to route, but she went on to Wash. and visited friends in that state, and now she will visit her sisters in Oakland awhile. Wrote to Mrs. Simmons. (T.S.R. 40. 2 P.M. 67. S.S. 59.)

Oct. 13. Monday. Received letters from Hannah and Eunice. Candidate for Gov. Markham of our State, passed through our town on the team and was greeted enthusiastically by our people. The band discoursed sweet music and anvils were fired, while a crowd thronged the Station. Mrs. Wilson and her daughter Hetta dined with us. Wrote to Eunice. (T.S.R. 44. 2 P.M. 72. S.S. 64.)

Oct. 15. Wednesday. Received letters from Ada, Ida and Hannah. Ida is painting a banner on cream colored satin for the Humboldt Co. Delegation to the Annual Convention of the W.C.T.U. to be held in Stockton next week. It is a yard in length and has a Scripture verse, Ps. 60:4 - on one side and on the other an imaginary landscape seem in Humboldt Co. Hannah is coming home tomorrow. Wrote to Eastern boys. (T.S.R. 38. 2 P.M. 74. S.S. 66.)

Oct. 16. Thursday. We are having very fine weather, as yet but little first, and there are many hoping the warm days will continue for a month yet, as there are as many as five hundred acres of growing potatoes between Montgomery's ranch and the old ferry place, which will soon be ripe if feasts do not cut them down. Hannah arrived after her two years' absence, and is looking very well indeed. Wrote to Oakland. (T.S.R. 44. 2 P.M. 75. S.S. 64.)

Oct. 19. Sabbath. We have attended meeting as usual. Rev. Thomas preached from the text. "He went about doing good. "Hannah played the church organ, and it seemed a wonderful improvement upon our usual church music. I stepped in to see Mrs. Thomas after service, as she is very poorly with throat trouble - can hardly speak aloud. Georgie is today thirteen years old and is a large boy of his age, weighing one hundred five pounds and is five feet and one half inch in height. So he is champion of all the children in weight, being five pounds heavier than either of the others were. In height, however, Ada and Ida exceeded him, and Hannah was just as tall as he is. He is not as great a comfort and help to me as the others were at his age, being noisy, impatient and meddlesome, so that it is quite a care to know what to do with him, but all this trouble is the result of thoughtlessness, for he is naturally kind-hearted. He must be busy all the time, he cannot keep still, but his activity is not always helpful. In his studies he is quite backward. He is not interested in reading for himself, though he enjoys hearing reading, so I try to read to him as much as I can. He has fallen quite behind Theresa in his school standing, but I hope he will soon take more interest in study and so catch up again. (T.S.R. 54. 2 P.M. 74. S.S. 68.)