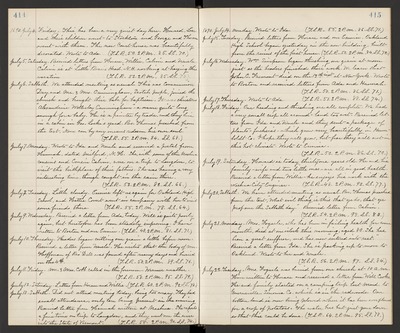 July 6. Sabbath. We attended meeting as usual. This was Communion Day, and Mr. & Mrs. Cunningham, Scotch people, joined the church and brought their babe for baptism. It was christened "Alexandrine Wellesley Cunningham" - a name quite long enough for a baby. He is a painter by trade, and they live in a cabin in Geo. Locke's yard. Rev. Thomas preached from the text, "None can by any means redeem his own soul". (T.S.R. 55. 2 P.M. 84. S.S. 68.)

July 7. Monday. Wrote to Ida and Uncle and received a postal from Hannah, dated Milford. N.H. She, with some of the Nashua cousins and Cousin Calvin, were on a trip to Langdon, to visit the birthplace of their fathers. She was having a very interesting time, though caught in the rain there. (T.S.R. 52. 2 P.M. 82. S.S. 66.)

July 13. Sabbath. Did not attend meeting today, being too weary. They had small attendance, only ten being present in the evening. Received letter from Hannah written at Nashua. She reports a fine time on trip to Langdon, and they went over the river into the State of Vermont. (T.S.R. 58. 2 P.M. 90. S.S. 74.)

July 16. Wednesday. Wm Simpson began threshing our grain at noon just as the headers finished their work. We learn that John C. Fremont died on the 13th inst at New York. Wrote to Boston and received letters from Ada and Hannah. (T.S.R. 50. 2 P.M. 86. S.S. 71.)

July 18. Friday. Our heading and threshing are all complete. We had a very small crop all around - land too wet. Received letters from Ida and Uncle and they sent a package of plants - fuchsias - which grow very beautifully in Humboldt Co. I hope they will grow, but fear they will not in this hot climate. Wrote to Eunice. (T.S.R. 50. 2 P.M. 86. S.S. 70.)

July 22. Tuesday. Mrs. Fogarle was buried from our church at 10 a.m. Have written to Horace and received a letter from Will Cooke. He and family started on a camping trip last Mond. to Guerneville, Sonoma Co. which is in the redwoods. Our bottom land is now being plowed where it has been overflowed for a crop of potatoes. The water has but just gone down so that this could be done. (T.S.R. 64. 2 P.M. 95. S.S. 78.)