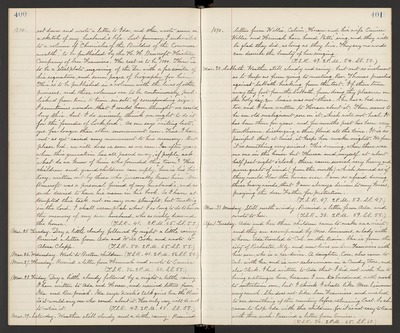 1890. sat down and wrote a letter to Ida, and then wrote some on a sketch of my husband's life. Last January, I subscribed to a volume of "Chronicles of the Builders of the Commonwealth", to be published by the H. H. Bancroft History Company of San Francisco. The cost is to be $1000. There is to be a steel plate engraving of the Dr. with a facsimile of his signature, and seven pages of biography for him. This is to be published in a volume with the lives of other pioneers, and these volumes are to be continuously published from time to time, in sets, of corresponding size. I sometimes wonder that I could have thought we could buy this, but I do sincerely, think we ought to do it for the "founder of Lockeford". As one says "writing lasts", yes, far longer than other monument can. True, I have not as yet raised any monument to his memory. But please God, we will do so as soon as we can. In after years when this generation has all passed away, if people ask, "what do we know of him who founded this town?" His children and grandchildren can reply, "here is his history, written out by those who personally knew him". Mr. Bancroft was a personal friend of my husband's, and as such desired to have his name in his book. So I have attempted this task, not in my own strength, but trusting in the Lord. I shall accomplish what I so long to do to honor the memory of my dear husband, who so richly deserved the honor. (T.S.R. 41. 2 P.M. 65. S.S. 55.)

Mar. 30. Sabbath. Weather still cloudy and rainy, but not so inclement as to keep us from going to meeting. Rev. Thomas preached against Sabbath-breaking from the text. "If thou turn away thy foot from the Sabbath, from doing thy pleasure on the holy day", &.c. Susie was not there. She has a bad sore toe, and I have written to Horace about it. There seems to be an old malignant sore on it, which will not heal. It has been there for years, and for months past has been very troublesome, discharging a thin fluid all the time. It is so painful that at times, it keeps her awake nights. We fear it is something very serious. This evening, when there was no one in the house but Theresa and myself, at about half past eight o'clock, there came several very heavy and severe gusts of wind (from the north) which seemed as if they would blow the house over. I am so afraid during these heavy winds, that I am always driven to my knees, praying the dear Father for protection. (T.S.R. 47. 2 P.M. 53. S.S. 47.)

Apr. 1. Tuesday. Ada and her three children came to make us a visit, and they are accompanied by Mrs. Simmons, a lady with whom Ada traveled to Cal. on the train. She is from the city of Rochester, N.Y. and now lives in San Francisco with her son, who is a car-driver. A daughter, Cora, also came to Cal. with her, and is now sales woman in a Candy Store, and also Clerk. I had written to Ada that I did not wish her to being a stranger here, because I am too burdened with work to entertain one, but I think I shall like Mrs. Simmons very much. She does not like San Francisco and wished to see something of the country before returning East. So she came to help Ada with the children, for it is not easy to travel with three such. Received a letter from Eunice. (T.S.R. 34. 2 P.M. 65. S.S. 60.)