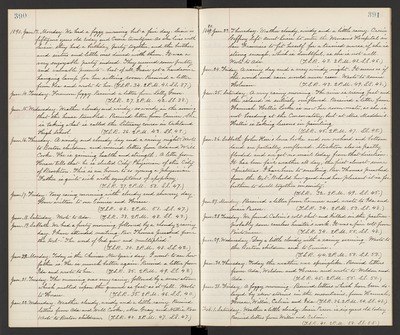 1890. Jan. 13. Monday. We had a foggy morning but a fair day. Susie is fiftyone years old today and Carrie twentyone. As she lives with Susie, they had a birthday party together, and the brothers and sisters and little ones dined with them. It was a very enjoyable party indeed. They received some pretty and valuable presents - best of all, Susie got a handsome hanging lamp for her sitting room. Received a letter from Ida and wrote to her. (T.S.R. 34. 2 P.M. 41. S.S. 37.)

Jan. 15. Wednesday. Weather cloudy and windy - so windy in the evening that the house trembled. Received letter from Eunice. She is taking what is called the Literary course in Oakland High School. (T.S.R. 36. 2 P.M. 43. S.S. 43.)

Jan. 16. Thursday. A windy and cloudy day and a rainy night. Wrote to Boston children and received letters from Ada and Will Cooke. He is gaining health and strength. A letter from Horace tells that he is elected City Physician of the city of Brockton. This is an honor to so young a physician. Father is quite sick with symptoms of apoplexy. (T.S.R. 37. 2 P.M. 50. S.S. 47.)

Jan. 25. Saturday. A very rainy morning. The river is rising fast and the island is entirely overflowed. Received a letter from Hannah. Hattie Locke is now her room-mate, as she is not boarding at the Conservatory, but at Mrs. Madden's. Hattie is taking lessons in painting. (T.S.R. 45. 2 P.M. 47. S.S. 45.)

Jan. 26. Sabbath. John Kerr's lever broke and our orchard and bottom laud are partially overflowed. Stockton also is partly flooded and we got no mail today from that direction. It has been fair weather all day, the first almost since Christmas. I have been to meeting. Rev. Thomas preached from the text, "Behold how good and how pleasant it is for brethren to dwell together in unity". (T.S.R. 32. 2 P.M. 49. S.S. 45.)