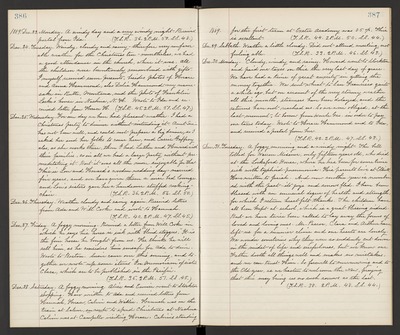 Dec. 24. Tuesday. Windy, cloudy and rainy - therefore very unfavorable weather for the Christmas tree - nevertheless, we had a good attendance in the church, where it was. All the children were bounteously remembered with gifts. I myself received seven presents, besides photos of Horace and Anna Hannah, also Delia Hammond my namesake in Butte, Montana, and the photo of Franklin Locke's house in Nashua, N.H. Wrote to Ida and received letter from Horace H. (T.S.R. 45. 2 P.M. 51. S.S. 47.)

Dec. 25. Wednesday. For one day we have had pleasant weather. I had a Christmas party to dinner without intending it. Aunt Susie has not been well, and could not prepare a big dinner, so I asked her and her folks to come here, and Carrie Geffroy also, as she works there, then I had Luther and Howard with their familes, so in all we had a large party without premeditating it. But it was all the more enjoyable for that. This is Lou and Howards's wooden wedding day - married five years, and we have given them a nice bed lounge and Lou's sisters gave her a handsome stuffed rocking-chair. (T.S.R. 36. 2 P.M. 56. S.S. 50.)

Dec. 27. Friday. A foggy morning. Received a letter from Will Cooke in which he says his horse is sick with "blind staggers." It is the fine horse he bought from us. He thinks he will sell him, as he considers him unsafe for Ada to drive. Wrote to Boston. Susie came over this evening, and together we wrote up some items "In memoriam" of sister Clara, which are to be published in the Pacific. (T.S.R. 35. 2 P.M. 51. S.S. 45.)

Dec. 28. Saturday. a foggy morning. Alice and Eunice went to Stockton shopping. Have written to Ada and received letters from Hannah, Horace, Calvin and Willie. Hannah was on the train at Salem, enroute to spend Christmas at Nashua, Calvin was at Campello visiting Horace. Calvin's standing

Dec. 30. Monday. Cloudy, windy and rainy. Howard went to Stockton and paid our taxes on this the very last day of grace. We have had a time of great anxiety in getting the money together. We sent wheat to San Francisco quite a while ago, but an account of the very stormy weather all this month, steamers have been delayed, and the returns have not reached us. So we were obliged, at the last moment, to borrow from Uncle Geo. in order to pay our taxes today. Wrote to Horace Hammond and to Ida, and received a postal from her. (T.S.R. 42. 2 P.M. 47. S.S. 43.)

Dec. 31. Tuesday. A foggy morning and a windy night. The bell tolled for Warren Misener, only fifteen years old, who died at the Lockeford House, where he has been for some time sick with typhoid-pneumonia. His parents live at Elliott. Have written to Josiah. And now another year is numbered with the past - its joys and sorrows fled. I have been blessed with an unusual degree of health and strength, for which I return heart felt thanks. The children have all been kept at school, which is a great blessing indeed. But we have twice been called to lay away the forms of loved and loving ones. Mr. Pascoe, Clara and Arthur have left us for a sunnier clime and our hearts are lonely. We wonder sometimes why they were so suddenly cut down in the midst of life and usefulness, but we know our Father doeth all things well and makes no mistakes, and we can trust Him. So farewell to murmuring and to the Old year, as we hasten to welcome the New, praying that this may bring us no such sorrows as the last. (T.S.R. 38. 2 P.M. 48. S.S. 44.)