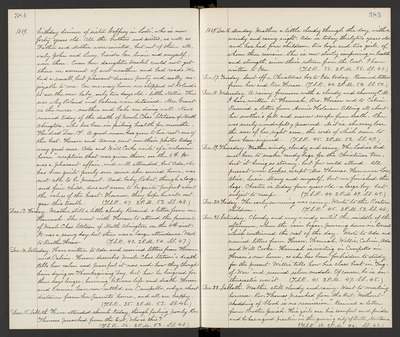 1889. birthday dinner of sister Geffroy in Lodi, who is now forty years old. All the brothers and sisters, as well as Father and Mother were invited, but out of them all, only John and Lucy, besides Geo. Susie and myself, were there. Even her daughter Mabel could not get there on account of wet weather and bad roads. We had a small, but pleasant dinner party and really enjoyable to me. On our way home we stopped at Roland's to see the new baby, only two days old - little Nellie. This was why Roland and Rebecca were detained. Mrs. Grant is the nurse - mother and babe are doing well. News received today of the death of Uncle Chas. Stetson of North Abington, who has been in failing health for months. He died Dec. 1st. A good man has gone to his rest - one of the best. Horace and Anna sent me their photos today very good ones. Ada and Will Cooke write of a "welcome home" reception that was given them on the 6th. It was a pleasant affair, and well attended, but Ada, who has been quite poorly ever since she arrived home, was not able to be present. And baby Robert, though a large and fine child, does not seem to be quite perfect about the valves of the heart. However, they hope he will outgrow this trouble. (T.S.R. 47. 2 P.M. 53. S.S. 48.)

Dec. 13. Friday. Weather still a little cloudy. Received a letter from our Hannah. She went with Horace to attend the funeral of Uncle Chas. Stetson of North Abington on the 4th inst. It was a snowy day, but there was a large attendance. Wrote to Brother Horace. (T.S.R. 43. 2 P.M. 54. S.S. 47.)

Dec. 14. Saturday. Have written to Ada and received letters from Horace and Calvin. Horace describes Uncle Chas. Stetson's death - tells how calm and peace feel it was, and how they thought him dying on Thanksgiving Day, but how he lingered for three days longer, hovering between life and death. Horace and Eunice have now settled in Campello, only a short distance from her parents' home, and all are happy. (T.S.R. 35. 2 P.M. 53. S.S. 46.)

1889. Dec. 16. Monday. Weather a little cloudy through the day, with a windy and rainy sight. Ada is today thirtytwo years old and has had four children, two boys and two girls, of whom three remain. She is now slowly improving in health and strength, since their return from the East. I have written to Ida. (T.S.R. 38. 2 P.M. 56. S.S. 48.)

Dec. 18. Wednesday. A rainy forenoon with a cloudy and showery P.M. I have written to Hannah, Bro. Horace and to Calvin. Received a letter from Annie Holman telling all about her mother's fall and narrow escape from death. She was surely wonderfully preserved. As it is, she may lose the use of her right arm, the cords of which seem to have been injured. (T.S.R. 45. 2 P.M. 52. S.S. 49.)

Dec. 19. Thursday. Weather windy, cloudy and rainy. The Ladies Aid met here to make candy bags for the Christmas tree, but it being so stormy, but few could attend. All present were Lockes, except Mrs. Thomas. Here were Lou, Alice, Susie, Mary and myself, but we finished the bags. Chester is today four years old - a large boy but subject to croup. (T.S.R. 44. 2 P.M. 49. S.S. 45.)

Dec. 21. Saturday. Cloudy and very windy until the middle of the afternoon, when the rain began pouring down in torrents which continued the rest of the day. Wrote to Ada and received letters from Horace, Hannah, Willie, Calvin, Ada and Will Cooke. Hannah is visiting in Campello in Horace's new home, as she has been forbidden to study for the present. Willie tells how his class beat in "Tug-of-War" and received silver medals. Of course, he is enthusiastic over it. (T.S.R. 41. 2 P.M. 47. S.S. 45.)

Dec. 22. Sabbath. Weather still cloudy and rainy. Went to meeting however. Rev. Thomas preached from the text, "Without shedding of blood is no remission". Received a letter from Broter Josiah. His girls are his comfort and pride and he has a good practice in the growing city of Butte, Montana. (T.S.R. 38. 2 P.M. 44. S.S. 48.)