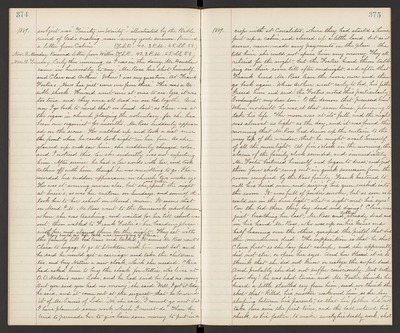 Nov. 12. Tuesday. Early this morning, as I was in the dairy. Mr. Henshaw came in hurriedly to say, "Mr. Ross has shot himself, and Clara and Arthur". "Where?" was my question. "At Frank Foster's. News has just come over from there". This was a terrible shock. Howard went over at once to see. Yes, it was too true, and they were all dead in one bed together. And now I go back to record that on Sund. last, as Clara was at the organ in church playing the voluntary, for she has been our organist for months, Mr. Ross suddenly appeared on the scene. He walked up and took a seat near the front where he could look right in her face. As she glanced up and saw him, she suddenly changed color, and I noticed this, for she evidently was not expecting him. After service, he had a few words with her, and took Arthur off with him, though he was unwilling to go. I have recorded his sudden appearance in church two weeks ago. He was at evening service also, but she and Arthur spent the night at Susie's, as was her custom on Sundays, and some of them took her to her school on Mond. morn. It seems that on Mond. P.M. Mr. Ross went to the Brunswick school house where she was teaching, and waited for her till school was out, then walked to Frank Foster's - her boarding place - with her and stayed there for the night. They sat with the family till bed time and talked. They could see his talk was annoying to Clara. It seems Mr. Ross wanted Clara to engage to go to Stockton with him next Sat. and he said he would get a carriage and take the children too, and buy Nettie a new cloak, which she needed. Clara had asked him to buy the cloak for Nettie, who lives at O.O. Norton's near Lodi, and he had said he had no money. "But you said you had no money", she said. "Well, I got it today", he said, and it came out at the inquest that he borrowed it of Mr. Enni's of Lodi. "No", she said, "I cannot go next Sat. I have planned some work which I must do." Then he tried to persuade her to give him some money to put in a

1889. crop with at Corralitos, where they had started a home, put up a cabin, and cleared up a little land, but as it seems, never made any payments on the place. She told him she could not spare him any money. They all retired for the night, but the Fosters heard them talking in their room till after midnight, and after that Frank heard Mr. Ross leave the room once and then go back again. When Arthur went early to bed, his father kissed him and said (the Fosters noted this particularly) "Goodnight, my dear Son." O the demon that possessed him! When no doubt he was, at that same time, planning to take his life. The moon was at its full, and the night was almost as light as the day, and it was found this morning that Mr. Ross had drawn up the curtain to the very top of the window, that he might avail himself of all the moon light. At five o'clock in the morning, the alarm of the family clock sounded, and immediately Mr. Foster bestirred himself and began to dress; and just then four shots rung out in quick succession from the room occupied by the Ross family. Frank hastened to call his hired man, and seizing his gun, rushed into the room. It was full of powder smoke, but as soon as he could see in the dim light, what a sight met his eyes! On the bed there they lay, dead and dying! Clara was just breathing her last, Mr. Ross and Arthur already dead, and in his hand Mr. Ross, who was up on his knees and half leaning over the others, grasped the pistol that did the murderous deed. The supposition is that he shot Clara first as she lay fast asleep, and she apparently did not stir, or open her eyes. And how blessed it is to think that she did not know or realize the awful deed and probably she did not suffer consciously. But Arthur poor boy! he was shot twice, and Mr. Foster thinks he heard a little startled cry from him, and we think the shot that killed his mother wakened him, as he lay sleeping between his parents, so that his father did not take sure aim the first time, and the ball entered his cheek, so his father, to make sure his deadly work, shot