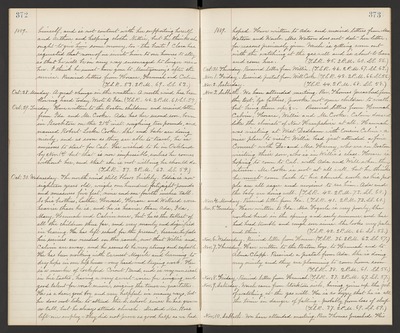 1889. himself, and is not content with her supporting herself and Arthur and helping cloth Nettie, but he thinks she ought to give him some money, too - the brute! Clara has requested that none of us invite him to our homes to stay, so that he will be in any way encouraged to linger near her. I think he must have gone to Montgomery's after the service. Received letters from Horace, Hannah and Calvin. (T.S.R. 53. 2 P.M. 69. S.S. 63.)

Oct. 29. Tuesday. Have written to the Boston children and received letters from Ida and Mr. Cooke. Ada has her second son, born in Brockton on the 21st inst. weighing ten pounds, and named Robert Locke Cooke. She and babe are doing nicely, and as soon as they are able to travel, he is anxious to start for Cal. He wished to be in Oakland by Nov. 1st but that is now impossible, unless he comes without her, and that she is not willing he should do. (T.S.R. 37. 2 P.M. 63. S.S. 59.)

Oct. 30. Wednesday. The north wind still blows briskly. Eddie is now eighteen years old, weighs one hundred fortyeight pounds and measures five feet, nine and one-fourth inches tall. So his brothers, Luther, Howard, Horace and Willard were heavier than he is, and he is heavier than Ada, Ida, Mary, Hannah and Calvin were, but he is the tallest of all the children thus far, and very manly and dignified in bearing. He has left school for the present, because he feels his services are needed on the ranch, now that Willie and Calvin are away, and he seems to be very strong and capable. He has been working with Earnest Magerle and learning to dry hops in our hop house - very hard and trying work. He is a member of Lockeford Cornet Band, and is very musical in his tastes, having a very sweet voice for singing, and good talent for vocal music, singing the tenor in quartettes. He is a dear, good boy and very helpful in many ways, but he does not like to attend the S. school since he has grown so tall, but he always attends church. Mr. and Mrs. Boss left our employ - they did not prove as good help as we had

1889. hoped. Have written to Ada and received letters from Mrs. Watson and Uncle. Mrs. Watson does not date her letter, for reasons previously given. Uncle is getting worn out with the watching at the gas well and is about to leave and come here. (T.S.R. 45. 2 P.M. 60. S.S. 56.)

Nov. 3. Sabbath. We have attended meeting. Rev. Thomas preached from the text, "Ye fathers, provoke not your children to wrath, but bring them up", &c. Received letters from Hannah, Calvin, Horace, Willie and Mr. Cooke. Calvin does not like the climate of New Hampshire at all. Hannah was visiting at West Dedham with Cousin Calvin - a nice place to visit. Willie had just attended a fine Concert with Dr. and Mrs. Harvey, who are in Boston visiting their son, who is in Willie's class. Horace is hoping to come to Cal. with Ada and Will when they return. Mr. Cooke is not at all well, but he thinks he must come back to his church work, as his people are all eager and anxious to see him. Ada and the baby are doing well. (T.S.R. 42. 2 P.M. 73. S.S. 60.)

Nov. 10. Sabbath. We have attended meeting. Rev. Thomas preached. His