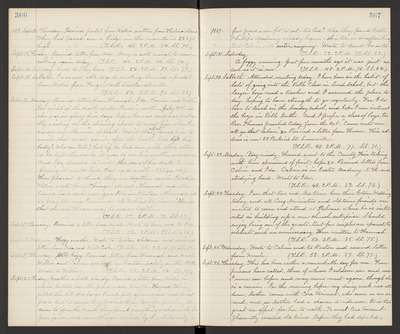 Sept. 16. Monday. Received letters from Hannah, Ida, Horace and Willie. Ida writes of the death of Mr. Pascoe's mother, July 31st, so she was in glory five days before he was, and was probably waiting on the shining shore to meet him when he crossed over the river of death. Was it that what caused him to smile that sweet smile after the breath had left his body? Who can tell? but if he had one wish above others as he left the world it was to see his mother once more and Ida dreaded to write the news of his death to Ans. fearing it would kill that aged mother (85 yrs. old). How pleasant to think they are together now in Paradise. Willie wrote from Chicago - all well. Hannah and Mrs. Eunice have each new quarters in Boston - Hannah at 36 Gray St. and Eunice at 83 Perkins St. Somerville, so that she and Horace may be nearer together. (T.S.R. 55. 2 P.M. 93. S.S. 83.)

Sept. 20. Friday. Weather a little cloudy. Received a letter from Willie in which he tells how the pears made trouble. He and Calvin filled the till of a large trunk full of our nicest and finest pears, but it seems they picked them too ripe, for when they came to open the trunk they found everything soaked with the pear juice, and some things ruined by it, while only a

Sept. 22. Sabbath. Attended meeting today. I have been in the habit of late of going into the Bible Class in Sund. School, but the larger boys need a teacher and I assumed the place today, hoping to have strength to go regularly. For I do love to teach in the Sunday school, and hope I can interest the boys in Bible truths. And I prefer a class of boys, too. Rev. Thomas preached today from the text, "Come unto me, all ye that labour", &c. Received a letter from Horace. His address is now 83 Perkins St. Somerville. (T.S.R. 48. 2 P.M. 77. S.S. 71.)

Sept. 24. Tuesday. I see that Rev. and Mrs. Brier have their Golden Wedding today, and all Cong. ministers and old time friends are invited to come and attend at Palermo, where he is interested in building up a new church enterprise. Should enjoy being one of the guests. But few couples are spared to celebrate such an anniversary. Have written to Hannah. (T.S.R. 50. 2 P.M. 85. S.S. 75.)

Sept. 26. Thursday. This has been rather a remarkable day for me. Four persons have called, three of whom I seldom see and one I never saw before and may never meet again, though she is a cousin. In the morning before my dairy work was all done, Mother come with Cora Vincent, who came on an errand, and so Mother had a chance to ride over. It is too great an effort for her to work. To meet Cora Vincent pleasantly recalled old times. Before they had departed,