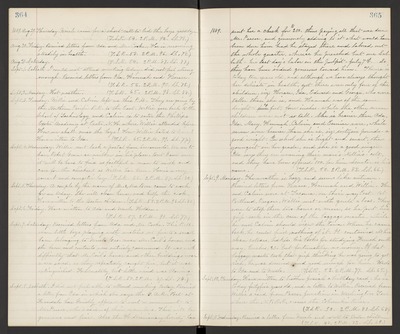 Sept. 3. Tuesday. Willie and Calvin left us this P.M. They are going by the Northern Pacific R.R. to the East. Willie goes back to the School of Technology and Calvin is to enter the Phillips Exeter Academy at Exeter, N.H. where Willie attended before. How we shall miss the boys! How Willie hated to leave! Have written to Ida. (T.S.R. 65. 2 P.M. 99. S.S. 77.)

Sept. 4. Wednesday. Willie sent back a postal from Sacramento. We are to have Robert Green as milker in his place. But I am sure it will be hard to find as faithful a man to milk and care for the chickens as Willie has been. He is a very smart and energetic boy. (T.S.R. 66. 2 P.M. 97. S.S. 80.)

Sept. 7. Saturday. Received letters from Ada and Mr. Cooke. This P.M. some little boys playing with matches set fire to a small barn belonging to Uncle Geo. near Mr. Coil's house, and the barn and contents were entirely consumed. It was with difficulty that Mr. Coil's house and other buildings near were saved, as they repeatedly caught fire, but it was extinguished. Fortunately but little wind was blowing. (T.S.R. 50. 2 P.M. 87. S.S. 74.)

Sept. 8. Sabbath. I did not feel able to attend meeting today. Received a letter from Ida in which she says the G.A.R. Post at Ferndale has kindly offered to used a monument to Mr. Pascoe, who was one of their members. This will be generous and fine. Also the H. Missionary Society has

1889. sent her a check for $200. thus paying all that was due Mr. Pascoe, and generously adding to it what would have been done him had he stayed there and labored out the whole quarter, whereas he preached but one Sabbath - his last day's labor in the pulpit - July 7th. So they have been indeed generous toward him. Theresa is today ten years old, and although we have always thought her delicate in health, yet there were only four of the children, viz: Horace, Ida, Edward and George, who were taller than she is, and Hannah was of the same height - 4 feet, four inches - while the other seven children were not so tall. She is heavier than Ada, Ida, Mary, Hannah, Calvin and Eunice were, while seven were heavier than she is, viz: sixtysix pounds - a good weight. In school she is bright and smart, the youngest in her grade, and she is a good singer. Ida says they are weaning their mare's Nellie's - colt, and they have been offere $100. for him - Senator is his name. (T.S.R. 50. 2 P.M. 83. S.S. 66.)

Sept. 9. Monday. The weather is hazy and seems like autumn. Received letters from Horace, Hannah and Willie. He and Calvin were at Tacoma, on their way East. At Portland, Oregon, Willie met with quite a loss. They were to stop there two hours or more, so he put his grip-sack in the care of the baggage master, while he and Calvin should view the town. When he came back, he could find nothing of it. It contained all his clean collars, hdkfs. his books for studying French on the way, brushes, &.c. but fortunately, no money. If that baggage master took that grip thinking he was going to get rich, he was deceived, and good enough for him. wrote to Ida and to Uncle. (T.S.R. 53. 2 P.M. 77. S.S. 65.)

Sept. 10. Tuesday. Have written to brother Josiah a birthday card - he is today fortyfive years old, and a letter to Willie. Received from Willie a card from Pascoe Junction in Washinton Ter. where the N.P.R.R. crosses the Columbia River. (T.S.R. 50. 2 P.M. 81. S.S. 68.)