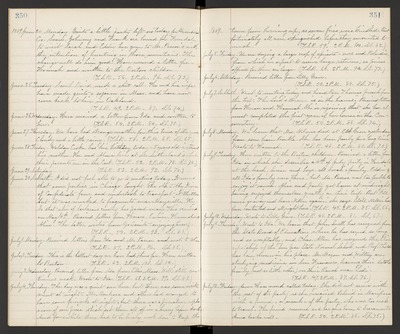 1889. June 24. Monday. Quite a little party left us today for Humboldt Co. Susie, Johnny and Frank are bound for Ferndale to visit Sarah, and Eddie has gone to Mr. Pascoe's with the intention of hunting in those mountains. The change will do him good. Have received a letter from Hannah and written to the Boston children. (T.S.R. 56. 2 P.M. 96. S.S. 73.)

June 30. Sabbath. I did not feel able to go to meeting today. It seems that some parties in Chicago bought the old Libby Prison of Confederate fame and undertook to transport it thither but it was wrecked to fragments near Maysville, Ky. So that relic of barbarous cruelty has passed away. This occurred on May 16th. Received letters from Horace, Eunice, Hannah and Alice. The letter writes from Yo Semite - enjoying herself. (T.S.R. 58. 2 P.M. 93. S.S. 81.)

July 4. Thursday. The day was a quiet one here but there was some excitement at night. Mr. Ambrose and others had arranged to have some fireworks at night, but there was a premature explosion of one piece which set them all of in a hurry before dark. And for awhile there had to be lively work done to keep the

July 7. Sabbath. Went to meeting today and heard Rev. Thomas preach from the text, "The Lord's throne is in the heavens". Received letters from Horace and Hannah. She is rejoicing that she has almost completed the first year of her course in the Conservatory. (T.S.R. 50. 2 P.M. 88. S.S. 74.)

July 9. Tuesday. Have written to the Boston children. Received a letter from Ida in which she describes a 4th of July party in Ferndale at the beach, Susie and boys. All Sarah's family, Eddie & all Ida's family were there, but Mr. Pascoe was too feeble to enjoy it much. Alice and party got home at midnight, having enjoyed themselves, greatly on their trip. "But I'll never go away and leave Nellie again", she says. Still Nellie has been contented and all right here. (T.S.R. 45. 2 P.M. 85. S.S. 66.)

July 11. Thursday. Wrote to Ida. We learn that John Swett has resigned from the Slate Board of Education where he has served so long and so acceptably, and Chas. Allen has resigned the Principalship of the San Jose State Normal School, and Prof. Childs has been chosen in his place. Mr. Mason and Wilton are studying medicine in San Francisco, leaving their little family (not so little either) on their Ranch near Lodi. (T.S.R. 47. 2 P.M. 87. S.S. 76.)

July 12. Friday. Anna Hammond called today. She did not arrive with the rest of the party, as she remained behind in Mariposa with a friend, a member of the party, who was too sick to travel. The friend recovered and has gone home to Sacramento. Anna looks well. (T.S.R. 50. 2 P.M. 88. S.S. 75.)