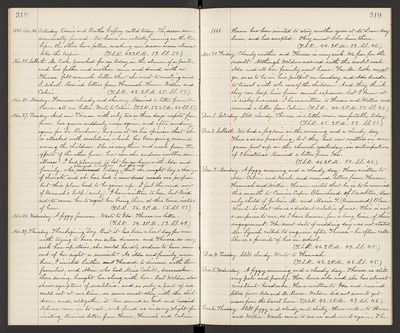 1888. Nov. 24. Saturday. Carrie and Bertha Geffroy called today. The season seems unusually forward. New leaves are actually coming on the trees before the others have fallen, making our season seem almost like the tropics. (T.S.R. 42. 2 P.M. 59. S.S. 55.)

Nov. 25. Sabbath. Mr. Cooke preached for us today, in the absence of a pastor, and his father and mother came and dined with us. Theresa felt so much better that she went to meeting and S. school. Received letter from Hannah, Horace, Willie and Calvin. (T.S.R. 42. 2 P.M. 65. S.S. 57.)

Nov. 27. Tuesday. And now Theresa, with only two or three days' respite from fever, has grown suddenly worse again, and after sending again for Dr. Barbour, he gives it as his opinion that she is attacked with scarletina which has been going around among the children. She is very thin and weak from the effects of the other fever - how can she endure another serious illness? I had planned to let her go home with Ada and family, who planned to return today, but did not that she might try a change of climate, and she has had a new dress made on purpose, but this plan had to be given up. I feel the need now of Hannah's help (souly). I have written to her, but tried not to cause her to regret her being there at this time, instead of here. (T.S.R. 36. 2 P.M. 55. S.S. 51.)

Nov. 29. Thursday. Thanksgiving Day. But it has been a hard day for me with trying to have an extra dinner and Theresa so very sick here up stairs, she could hardly endure to have me out of her sight a minute. As Ada and family were here, I invited Luther and Howard to dinner with their families, and Alice, who had Miss Cahill, dressmaker, there sewing, brought her along with her. But Weldon also shows symptoms of scarletina, and so only a part of us could eat at one time, as some must stay with the children, and, altogether, it has seemed so sad and hurried. Rebecca came in to call, and found us in sorry plight for visiting. Received letters from Horace, Hannah and Calvin.

Nov. 30. Friday. Cloudy weather and Theresa is very sick. We fear for the result. Although Weldon was red with the scarlet rash Ada and all her family went home. For Mr. Cooke must go, so as to be in his pulpit on Sunday, and Ada dreads to travel with sole care of the children. And they think they can keep him from much exposure, but I know it is risky business. I have written to Horace and Willie and received a letter from Calvin. (T.S.R. 44. 2 P.M. 50. S.S. 48.)

Dec. 2. Sabbath. We had a fog rain in the morning and a cloudy day. There was no preaching, but they had new mottoes in evergreen put up in the church yesterday, in anticipation of Christmas. Received a letter from Ida. (T.S.R. 46. 2 P.M. 50. S.S. 48.)

Dec. 3. Monday. A foggy morning and a cloudy day. Have written to Ada. Calvin and Uncle, and received letters from Horace, Hannah and Willie. Horace writes that he is to be married this month to Eunice Capen Blanchard of Brockton, Mass. only child of Julian M. and Maria T. (Hammond) Blanchard. So that she is a distant relative of ours. This is not a surprise to me, as I have known, for a long time, of their engagement. The exact date of wedding day was not stated. Mr. Lynch called to enquire after Theresa - he often calls. She is a favorite of his in school. (T.S.R. 46. 2 P.M. 49. S.S. 45.)

Dec. 5. Wednesday. A foggy morning and cloudy day. Theresa is still very pale and poorly. Her bones ache and she has almost constant headache. Have written to Ida and received letters from Ada and Mr. Pascoe. Weldon did not sum to get worse from the travel home. (T.S.R. 42. 2 P.M. 47. S.S. 46.)

Dec. 6. Thursday. Still foggy and cloudy and chilly. Have written to Horace and Willie. Wucle came to see us and went again. The