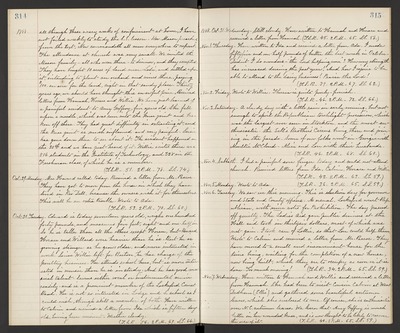 1888. all through these weary weeks of confinement at home, I have not failed weekly to study the S.S. lesson. Rev. Mason preached from the text, "Now commandeth all men everywhere to repent." The attendance at church was very small. We invited the Mason family - all who were there - to dinner, and they accepted. They have bought 10 acres of land near Lodi, and settled upon it, intending to plant an orchard and vines there, paying $100. an acre for the land, right in that sandy place. Thirty years ago, we should have thought this an awful price. Received letters from Hannah, Horace and Willie. We have just learned of a painful accident to Amy Geffroy, five years old. She fell upon a needle which was run into the knee joint and broken off there. They had great difficulty in extracting it, and the knee joint is much inflamed and very painful. Susie has gone down there to see about it. The accident happened on the 20th and we have just heard of it. Willie writes there are 816 students in the Institute of Technology, and 328 in the Freshman class, of which he is a member. (T.S.R. 51. 2 P.M. 78. S.S. 74.)

Oct. 30. Tuesday. Edward is today seventeen years old, weighs one hundred forty pounds, and measures five feet, eight and one-half in. So he is taller than all the others except Horace, but Howard, Horace and Willard were heavier than he is. But he is growing stronger as he grows older, and more interested in work. Since Willie left for Boston, he has charge of the poultry business. He attends school here, but is more interested in music than he is in study. And he has good musical talent - learns either vocal or instrumental music readily - and is a prominent member of the Lockeford Cornet Band. He is not so interested in Lodge and S. school as I could wish, through still a member of both. Have written to Calvin and received a letter from Ida which is fifteen days old, having been missent. Weather cloudy. (T.S.R. 56. 2 P.M. 69. S.S. 64.)

Nov. 1. Thursday. have written to Ida and received a letter from Ada. I made fiftyfive and one-half pounds of butter the last week in October. Didn't I do wonders - "the Lord helping me"? How many strength has increased during the past year! And how I rejoice to be able to attend to the dairy business! Praise the Lord! (T.S.R. 39. 2 P.M. 67. S.S. 62.)

Nov. 3. Saturday. A cloudy day with a little rain in early evening, but not enough to spoil the Republican torchlight procession, which was the largest ever seen in Stockton, and the most enthusiastic - the Sell's Brother's Circus being there and joining in the parade. Some of our folks went in - Georgie with Moultie McCloud - Alice and Lou with their husbands. (T.S.R. 46. 2 P.M. 68. S.S. 60.)

Nov. 6. Tuesday. We saw ice this morning. This is election day for governor and State and County officers. As usual, Lockeford went Republican, with nine votes for Prohibitions. The day passed off quietly. The Ladies Aid gave public dinners at the Hall and took in thirtysix dollars, most of which was not gain. I took care of Lottie, so that Lou could help them. Wrote to Calvin and received a letter from Mr. Pascoe. They have moved to a small and inconvenient house for the time being, waiting for the completion of a new house, now being built, which they are to occupy as soon as it is done. Too much moving! (T.S.R. 34. 2 P.M. 65. S.S. 59.)

Nov. 7. Wednesday. Have written to Hannah and Willie and received a letter from Hannah. She had been to visit Cousin Calvin at West Dedham (Ellis) and gathered some beautiful autumn leaves, which she enclosed to me. Of course, she is enthusiastic over N.E. autumn leaves. We learn that Amy Geffroy is much better in her wounded knee, and is now thought to be likely to recover the use of it. (T.S.R. 40. 2 P.M. 65. S.S. 59.)