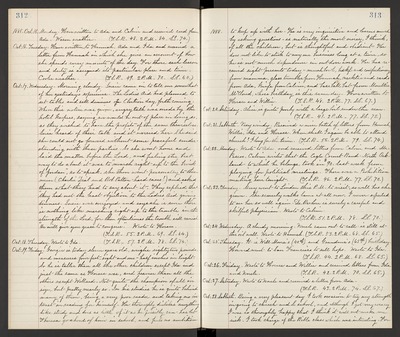 Oct. 16. Tuesday. Have written to Hannah, Ada and Ida and received a letter from Hannah in which she gives an account of how she spreads every minute of the day. For there each lesson and duty is assigned its particular place and time. Cooler weather. (T.S.R. 49. 2 P.M. 70. S.S. 60.)

Oct. 17. Wednesday. Morning cloudy. Susie came in to tell me somewhat of her yesterday's experience. The Ladies Aid had planned to set tables and sell dinners on Election day, forth coming. When this notice was given, angry talk was made by the hotel keepers, saying we would be out of place in dining so, as they wished to have the profits of the same themselves. Susie heard of their talk and it worried her. She said she could not go forward without some peaceful understanding with these parties. So she went home and laid the matter before the Lord, and feeling the best way to do about it was to "march right up to the brink of Jordan", so to speak, she then went personally to these men (Charlie Dial and Bob Patton - hard cases!) and asked them what they had to say about it. They replied that "they had not the least objection" to the Ladies Aid giving dinners. Susie was overjoyed and says she is sure there is nothing like marching right up to the trouble in the strength of the Lord, for then oftentimes the trouble will vanish. "He will give you grace to conquer". Wrote to Horace. (T.S.R. 55. 2 P.M. 69. S.S. 64.)

Oct. 19. Friday. Georgie is today eleven years old, weighs eightytwo pounds, and measures four feet, eight and one-half inches in height. So she is taller than all the other children except Ida and just the same as Horace was, and heavier than all the others except Willard. Not quite the champion of all in size, but pretty nearly so. In his studies he is quite behind many of them, being a very poor reader and taking no interest in reading for himself. He thoroughly dislikes anything like study and does a little of it as he possibly can - has let Theresa go ahead of him in school, and feels no ambition

1888. to keep up with her. He is very inquisitive and learns much by asking questions - is naturally the most noisy. I think, of all the children, but is thoughtful and obedient. He does not like to stick to any one business long at a time, so he is not much dependence in out door work. He has received eight presents today - mush bowl, hdkf. and confectionery from mamma, glass tumbler from Hannah, necktie and cards from Ada, knife from Calvin, and baseball bat from Moultie McCloud, whose birthday is this same day. Have written to Horace and Willie. (T.S.R. 48. 2 P.M. 77. S.S. 67.)

Oct. 22. Monday. Wrote to Ada and received letters from Calvin and Mr. Pascoe. Calvin writes that the Eagle Correct Band - North Oakland to which he belongs, took in $90. last week from playing for political meetings. There was a Prohibition meeting here tonight. (T.S.R. 46. 2 P.M. 77. S.S. 70.)

Oct. 28. Sabbath. being a very pleasant day I took occasion to try my strength in going to church and S. school, and although I got very weary I was so thoroughly happy that I think it will not make me sick. I took charge of the Bible class which was interesting. For