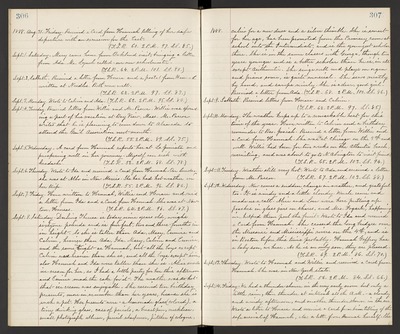 Sept. 4 Tuesday. Received letters from Willie and Mr. Pascoe. Willie was spending a part of his vacation at Bay View, Mass. Mr. Pascoe writes that he is planning to come down to Alameda to attend the Gen'l Association next month. (T.S.R. 55. 2 P.M. 89. S.S. 75.)

Sept. 8. Saturday. Darling Theresa is today nine years old, weighs sixtyone pounds and is four feet, two and three- fourths in. in height. So she is taller than Ada, Mary, Eunice and Calvin, heavier then Ada, Ida, Mary, Calvin and Eunice. and the same in Weight as Hannah, but all the boys except Calvin were heavier than she is, and all the boys except him, also Hannah and Ida were taller than she is. Alice made ice-cream for her, so I had a little party for her this afternoon and Eunice made the cake for it. The weather was so hot that ice cream was enjoyable. She received ten birthday presents, more in number than her years, because she is such a pet. Her presents were - a lemonade glass (colored), a tiny drinking glass, case of pencils, a breast pin, necklace, small photograph album, pencil sharpener, pitcher of cologne,

1888. calico for a new dress and a silver thimble. She is smart for her age, has been promoted from the Primary room at school into the Intermediate, and is the youngest scholar there. She is in the same classes with George, though two years younger and is a better scholar than he is, in all except Arithmetic. She sings well and plays an organ and piano some, is quite musical. She sews neatly by hand, and sweeps nicely. She is a dear, good girl. Received a letter from Ada. (T.S.R. 68. 2 P.M. 100. S.S. 86.)

Sept. 10. Monday. The weather keeps up to a remarkable heat for this time of the year. Have written to Calvin and a birthday reminder to Bro. Josiah. Received a letter from Willie and a Card from Hannah. she was at Chicago on the 5th and well. Willie had been for two weeks on the Atlantic beach, recruiting, and about to go to N. Abington to visit friends. (T.S.R. 65. 2 P.M. 103. S.S. 94.)

Sept. 12. Wednesday. Now comes a sudden change in weather, and grateful too. It is windy and a little cloudy. Uncle came and made us a call. Alice and Lou were here putting up peaches in glass jars on shares, and Mrs. Fogarle, happening in, helped them peel the fruit. Wrote to Ida and received a Card from Hannah. She crossed the long bridges over the Missouri and Mississippi rivers on the 4th, and is in Boston before this time probably. Hannah Geffroy has a baby son, we hear. As he is an only son, they are pleased. (T.S.R. 69. 2 P.M. 86. S.S. 70.)

Sept. 14. Friday. We had a thunder shower in the very early morn but only a little rain, then thunder at intervals all the A. M. - a cloudy and windy afternoon, and another thundershower in the eve. Wrote a letter to Horace and received a Card from him telling of the safe arrival of Hannah, also a letter from Hannah herself. She