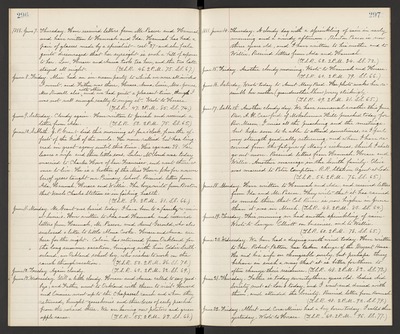 1888. June 7. Thursday. Have received letters from Mr. Pascoe and Hannah, and have written to Hannah and Ida. Hannah has had a pair of glasses made by a specialist - cost $27. - and she feels quite discouraged that her eyesight is such a bill of expenses to her. Lou, Horace and Anna took tea here, and the two latter stayed all night. (T.S.R. 46. 2 P.M. 75. S.S. 67.)

June 10. Sabbath. J.P. Grant died this morning at four o'clock, from the effects of the kick of the mule. He never rallied but has lingered in great agony until this time. His age was 38. He leaves a wife and three little sons. Lulu McCloud was today married to Charles Howe of San Francisco, and went there at once to live. He is a brother of the Miss Howe who for a number of years taught our Primary School. Received letters from Ada, Hannah, Horace and Willie. The boys write from Boston that Uncle Charles Stetson is in failing health. (T.S.R. 50. 2 P.M. 81. S.S. 66.)

June 11. Monday. Mr. Grant was buried today. I have been to a family re-union at Susie's. Have written to Ada and Hannah and received letters from Hannah, Mr. Pascoe and Aunt Gerould, who also enclosed a letter to little Alma Cooke. Horace and Anna are here for the night. Calvin has returned from Oakland for the long summer vacation, bringing with him Eddie Sutherland, an Oakland school-boy, who wishes to work on the ranch through vacation. (T.S.R. 50. 2 P.M. 86. S.S. 70.)

June 13. Wednesday. Still a little cloudy. Horace and Anna called to say goodbye, and Father went to Oakland with them to visit. Howard and Eunice went up to the Chaparral ranch and when they returned, brought gooseberries and three boxes of early peaches from the orchard there, We are having new potatoes and green apple sauce. (T.S.R. 55. 2 P.M. 83. S.S. 68.)

June 17. Sabbath. Another cloudy day. We have unusual weather this June. Rev. A.H. Crawford of Mokelumne Hill preached today for Rev. Mason. I miss all the preaching and the meetings, but hope soon to be able to attend sometimes, as I feel my strength gradually returning, and when I have recovered from the fatigue of Mary's sickness, think I shall go out more. Received letters from Hannah, Horace and Willie. Another marriage in the Smith family. Olive was married to Peter Compton - R.R Station Agent at Lodi. (T.S.R. 56. 2 P.M. 76. S.S. 65.)

June 20. Wednesday. We have had drying north wind today. Have written to Ida. Robert Patton has taken charge of the Bryant House. He and his wife are changeable surely, but perhaps they behave in such a way that it is better for them to often change their residence. (T.S.R. 48. 2 P.M. 83. S.S. 73.)