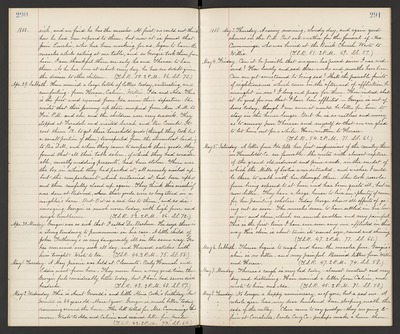 1888. sick and we find he has the measles. At first we could not think how he had been exposed to them, but now it is found that Jim Emslie, who has been working for us, began to have the measles while eating at our table, and so Georgie took them from him. I am thankful there are only he and Theresa to have them. As he has been at school every day, he has no doubt given the disease to other children. (T.S.R. 50. 2 P.M. 86. S.S. 72.)

Apr. 29. Sabbath. Have recieved a large batch of letters today, interesting and comforting - from Horace, Calvin, Willie, Ida and Ada. This is the first word received from Ida since their departure. She writes that their journey up there occupied from Mon. A.M. to Fri. P.M. and she and the children were very seasick. They stopped at Ferndale and visited Sarah and Rev. Coombe. It cost them $12. to get their household good (though they took but a small portion of them) transported from the steamboat landing to Rio Dell, and when hey came to unpack their goods, they found that all their table silver, of which they Had considerable, mostly wedding presents, had been stolen. There was the box in which they had packed it, all securely nailed up, but the compartment which contained it, had been rifled and then carefully closed up again. They think this mischief was done at Redwood, where their goods were so long stored in a neighbor's barn. But O it is a sad loss to them, and so discouraging. Georgie is much worse today, with high fever and cough troublesome. (T.S.R. 52. 2 P.M. 86. S.S. 72.)

Apr. 30. Monday. Georgie was so sick that I called Dr. Barbour. he says there is a strong tendency to pneumonia in his case. A little child of John Tretheway's is very dangerously ill in the same way. Geo. has remained very sick all day, and Howard watches with him tonight. Wrote to Ida. (T.S.R. 44. 2 P.M. 75. S.S. 58.)

May 1. Tuesday. A May picnic was held at Clements. Only Hannah and Eddie went from here. They never have a very good time there. Georgie feels considerably better today, but I have had severe sick headache. (T.S.R. 43. 2 P.M. 68. S.S. 57.)

May 2. Wednesday. This is Aunt Gerould's and Little Alma Cooke's birthday. Aunt Gerould is 84 years old - Alma 1 year. Georgie is much better today - running around the house. The bell tolled for Mrs. Cummings this morn. Wrote to Ada and Calvin and received letter from Uncle. (T.S.R. 42. 2 P.M. 77. S.S. 60.)

May 4. Friday. Can it be possible that one year has passed since I was widowed? How lonely and sad these weeks and months have been. Can one get accustomed to being sad? Shall "The peaceable fruits of righteousness" which come in the "afterward" of affliction, be wrought in me? I long and pray for them. Then indeed shall it be good for me that I have been afflicted". - Georgie is out of doors today, though I am sure it would be better for him to stay in the house longer. But he is so restless and noisy as to annoy poor Theresa and myself so that we are glad to let him out for a while. Have written to Horace. (T.S.R. 54. 2 P.M. 71. S.S. 61.)

May 5. Saturday. A letter from Ida tells her first impressions of the country there in Humboldt Co. are favorable. She writes with almost rapture of the grand old redwood and pine woods, in the midst of which the Mills of Scotia were situated, and wishes I could be there to walk with her through them. She took roseola from being exposed to it here, and has been quite ill, but is now better. They have a large house to live in plenty of room for her painting scholars. Today George shows ill effects of going out so soon. The measles seem to have settled in his lower jaw and chin, which are much swollen and very painful. This is the first time I have ever seen any one afflicted in this way. His chin is about twice its usual size, round and shining (T.S.R. 47. 2 P.M. 77. S.S. 66.)

May 8. Tuesday. No longer a happy anniversary, as of you, but a sad one. A whole year has my dear husband been sleeping neath the sods of the valley. Clara came to say goodbye -they are going to live at Corralitos, Santa Cruz Co. - perhaps make a home there.