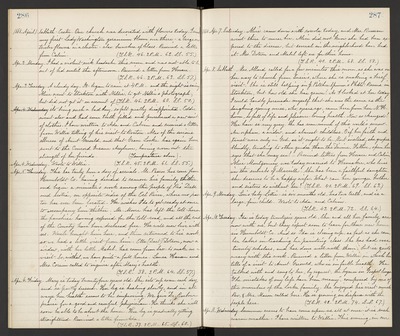 Apr. 3. Tuesday. A cloudy day. It began to rain at 4P.M. and the night is rainy Alice went to Stockton with Nellie, to get Nellie's photograph, but did not get it on account of (T.S.R. 46. 2 P.M. 60. S.S. 50.) its being such a bad day, so felt greatly disappointed. Eddie went also and had some teeth filled and purchased a new suit of clothes. I have written to Ada and Calvin and received a letter from Willie telling of his visit to Boston. Also of the serious illness of Aunt Gerould, and that Grace Locke has again been sent to Concord Insane Asylum, having worn out the strength of her friends. (Temperature above)

Apr. 5. Thursday. This has truly been a day of arrivals. Mr. Pascoe has come from Humboldt Co. having decided to remove his family thither, and begin a minister-s work among the people of Rio Dell and Scotia, on opposite sides of the Eel River, where no pastor has ever been located. He wishes Ida to get ready at once to accompany him thither. Mr. Moore has left the toll-house the franchise having expired for the toll-road, and all the road of the County have been declared free. He will now live with us. Uncle brought him here, and then returned to his work, so we had a little visit from him. Etta (Dart) Dotson, now a widow, with her little Mabel, has come from Sac. to make us a visit. So, withal, we have quite a full house. Laura Hansen and Mrs. Corwin called to inquire after Mary's health. (T.S.R. 38. 2 P.M. 64. S.S. 57.)

Apr. 6. Friday. Mary is today twentyfour years old. She sits up some each day and is partly dressed. Her leg is healing slowly, and in all ways her health seemes to be improving. We give Dr. Barbour praise for a good and careful physician. He thinks she will soon be able to be about the house. Her leg is gradually getting straightened. Received a letter from Ada. (T.S.R. 37. 2 P.M. 65. S.S. 60.)

Apr. 8. Sabbath. Mrs. Allard called for a few minutes this morn. as she was on her way to church from Susie's where she is making a brief visit. She is still helping in J. Pitcher Spooner's Phbts. Rooms in Stockton, but how old she has grown! As I looked at her today I could hardly persuade myself that she was the same as the laughing young miss, who, years ago, came here from her N.H. home so full of life and pleasure-loving health. Now so changed! Her hair is very gray. She has seen much of this world's sorrow. An orphan, a widow, and almost childless, O if her faith and trust were only in God, as it ought to be. But instead, she gropes blindly, rusting to other guides than the Divine, Father, open her eyes that she may see! - Received letters from Horace and Calvin. Alice Montgomery was today married to Hamaker, who lives in the suburbs of Macville. She has been a faithful daughter, she deserves to be a happy wife. What can her younger brother and sisters do without her? (T.S.R. 40. 2 P.M. 69. S.S. 63.)

Apr. 10. Tuesday. Ida is today twentysix years old. She and all her family are now with us, but they expect soon to leave for their new home in Humboldt Co. And so Ida is closing up, as fast as she can, her labors in teaching her painting class. She has had over twenty scholars, and has done well with them, but is quite weary with the work. Received a letter from Willie in which he tells of a visit to Aunt Gerould, who is in feeble health. He talked with a san to her, by request, the Hymn in Gospel Songs "The mistakes of my life have been many", composed by one of the members of the Locke family. She enjoyed his visit much. Rev. & Mrs. Mason called here. He is growing in disfavor with the people here. (T.S.R. 42. 2 P.M. 74. S.S. 67.)

Apr. 11. Wednesday. Summer seems to have come upon us all at once - it is such warm weather. I have written to Willie. This evening, in our