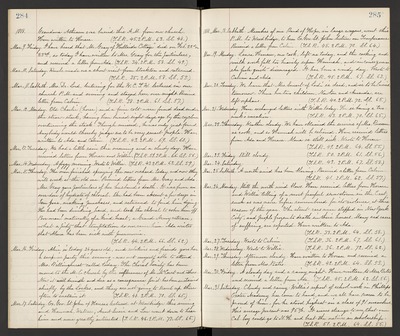 Mar. 12. Monday. Old Charlie (horse) and a fine colt were found dead under the straw-stack, having been buried eight days ago by the cyclone overturning the stack. Though missed, he was only just found. Anybody would thereby judge us to very smart people. Have written to Ada and Calvin. (T.S.R. 43. 2 P.M. 69. S.S. 60.)

Mar. 15. Thursday. The men finished spraying the new orchard today, and now they will work at the old one. Received letters from Mrs. Gray and Ada. Mrs. Gray gave particulars of her husband's death. It was from an over-dose of hydrate of chloral. She had been absent a few days in San Jose, making purchases, and returned to find him dying. He had been drinking hard, and took the chloral to sober him off. Poor man! naturally of a kind heart, a Grand Army veteran, what a pity that temptation so over came him. Ada writes that Alma has been sick with pneumonia. (T.S.R. 44. 2 P.M. 66. S.S. 62.)

Mar. 16. Friday. Alice is today 26 years old, and relatives and friends gave her a surprise party this evening - was not myself able to attend. Mrs. Billinghurst called today. The Choral Society has been moved to the M.E. Church by the influence of Mr. McCourt and others. Now it will dwindle and die as a consequence for it has sustained chiefly by the Lockes, and they are not going to travel up there often to sustain it. (T.S.R. 48. 2 P.M. 70. S.S. 65.)

Mar. 26. Monday. Still the north wind blows. Have received letters from Horace and Willie telling of a most fearful snowstorm in the East, such as was never before remebered for its violence, at this season of the year. The street cars were stopped in New York City, and people frozen to death in their houses. Many sad cases of suffering are reported. Have written to Ada. (T.S.R. 33. 2 P.M. 64. S.S. 58.)