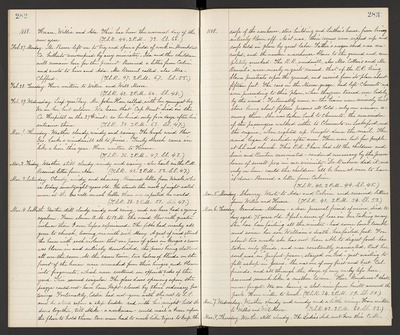 Feb. 27. Monday. Mr. Pascoe left us to try and open a field of work in Humboldt Co. hitherts unoccupied by any minister. Ida and the children will remain here for the present. Received a letter from Calvin and wrote to him and Ada. Mrs. Bruml called, also Mrs. Clifford. (T.S.R. 47. 2 P.M. 67. S.S. 55.)

Mar. 3. Saturday. Cloudy, windy and showery. Received letter from Uncle, who is today seventyeight years old. He stands the work of night watchman at the Gas well much better than we expected he would. (T.S.R. 38. 2 P.M. 51. S.S. 47.)

Mar. 4. Sabbath. Weather still cloudy, windy and rainy, and we have had a young cyclone. From eleven A.M. to 12 M. the wind blew with greater violence than I ever before experienced. The folks had nearly all gone to church, leaving me with sick Mary. A gust of wind struck the house with such violence that on pane of glass in Georgie's room was blown in and entirely demolished, the pieces being scattered all over the room. At the same time, two halves of blinds on the front of the house were wrenched from their hinges and blown into fragments, which were scattered an opposite sides of the yard. This seemed singular. The glass doors opening upon the piazza could not have been kept closed by their ordinary fastenings. Fortunately, Eddie had not gone with the rest to S.S. and he stood upon a step-ladder and with his weight held the doors together, till Mike - a workman - could nail a brace upon the floor to hold them. Our men had to work like tigers to keep the

1888. roofs of the warehouse, store building and Luther's house, from being entirely blown off. As it was, their corners were ripped up and roofs held in place by great labor. Father's wagon shed was unroofed, and the wooden warehouse blown to the ground and completely wrecked. The R.R. windmill, also Mrs. Cotton's and Mr. Bruml's, were nearly or quite ruined, that of the R. R. being blown prostrate upon the ground, and carried from its place about fifteen feet. The cars on the Narrow-guage, had left Clements and were proceeding to this place, when they were turned over bodily by the wind. Fortunately none on the train were seriously hurt there being about fifteen persons all told - only one woman among them. She was taken back to Clements, the remainder of the passengers walked either to Clements or Lockeford, and the engine, when righted up, brought down the mail. The wind began to subside after noon. There were but few people at S.S. and church. This P.M. I have had all the children and Susie and Benton vaccinated - rendered necessary by the prevalence of small-pox in our vicinity - Dr. Barbour did it, and only on Sun. could the children all be here at once to have it done. Received a letter from Calvin. (T.S.R. 40. 2 P.M. 44. S.S. 45.)

Mar. 6. Tuesday. Grandma Athearn - a dear personal friend of mine, died today aged 75 years old. I feel a sense of loss in her taking away. She has been failing all the winter - had some bowel trouble - and since her son William's death, has failed fast. For about two weeks she has not been able to digest food - has taken only fluids, and was constantly nauseated. But her soul was in "perfect-peace, stayed on God" - just waiting to fall "asleep in Jesus". She was one of my first and best Cal. friends, and all through the days of my early life here, seemed much like a mother to me. Her kindness I shall never forget. We are having a slat-wire fence built around the park. Have written to Uncle. (T.S.R. 34. 2 P.M. 59. S.S. 50.)