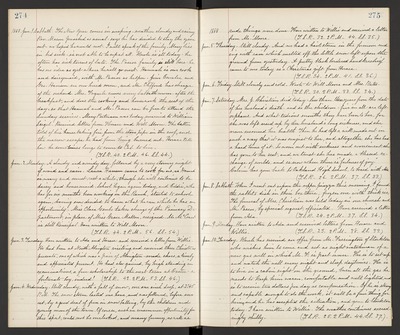 1888. Jan. 1. Sabbath. The New Year comes in weeping - weather cloudy and rainy Rev. Mason preached as usual - says he has decided to stay the year out - we hoped he would not. I will speak of the family. Mary lies in bed sick - is not able to be up at all. Uncle is ill today - he often has sick turns of late. The Pascoe family is still here - he has no idea as yet where he will go next. Hannah is our cook and dairymaid, with Mr. Pascoe as helper. Jim Emslee and Geo. Hansen are our hired men, and Mr. Clifford has charge of the orchard. Mrs. Fogarle comes every Sabbath morn. after the breakfast, and does the cooking and housework the rest of the day, so that Hannah and Mr. Pascoe can be free to attend the Sunday services. Mary Putnam was today married to William Seigel. Received letters from Horace and Will Moore. The latter told of his house taking fire from the stove pipe in the roof, and the narrow escape he had from being burned out. Horace tells how he sometimes longs to come to Cal. to live. (T.S.R. 40. 2 P.M 46. S.S. 44.)

Jan. 2. Monday. A cloudy and windy day, followed by a very stormy night of wind and rain. Laura Hansen came to cook for us, as Hannah is weary and must rest a while, though she will continue to be dairy and housemaid. School began again today, and Eddie, who has for six months been working on the Ranch, started to school again, having now decided to learn what he can while he has an opportunity. Miss Clara Grubs takes charge of the Primary Department, in place of Miss Grace Mallon, resigned. Mr. McCourt is still Principal. Have written to Will Moore. (T.S.R 44. 2 P.M 56. S.S. 54.)

Jan. 3. Tuesday. Have written to Ada and Horace and received a letter from Willie. He had been at North Abington visiting, and received three Christmas presents, one of which was a pair of Abington-made shoes, a timely and appreciated present. He had also gained, by high standing in examination, a free scholarship to the next term of Exeter - a fortunate boy, indeed! (T.S.R. 42. 2 P.M 53. S.S. 46.)

Jan. 4. Wednesday. Still cloudy, with a fall of snow, over one inch deep, at 3:45 P.M. The snow storm lasted one hour, and was followed, before sunset, by a good deal of fun in snowballing, by the children and young men of the town. Of course, such an uncommon opportunity for this sport, could not be overlooked, and many funny, as well as

Jan. 5. Thursday. Still cloudy. And we had a hail storm in the forenoon ending with rain which melted off the little snow left upon the ground from yesterday. A pretty black bordered handkerchief came to me today as a Christmas gift from Horace. (T.S.R. 34. 2 P.M 41. S.S. 36.)

Jan. 7. Saturday. Mrs. J. Christian died today - less than three years from the date of her husband's death - and so the children - five in all - are left orphans. And what tedious months they have been to her, for she was left used up by her husband's long sickness, and she never recovered her health. Then he had left a will made out in such a way that it was unjust to her, and altogether she has had a hart time of it. So worn out with sickness and worriment, she has gone to her rest, and we trust she has made a blessed exchange of worlds, and is now where there is "fulness of joy". Calvin has gone back to Oakland High School, to board with Ada. (T.S.R. 26. 2 P.M. 37. S.S. 33.)

Jan. 8. Sabbath. When I went out upon the upper piazza this morning, I found the rabbits dish in their box there, frozen over with thick ice. The funeral of Mrs. Christian, was held today in our church and Mr. Pascoe, by special request, officiated. Have received a letter from Ada. (T.S.R. 24. 2 P.M. 37. S.S. 34.)

Jan. 10. Tuesday. Uncle has received an offer from Mr. Farrington of Stockton who wishes him to come and act as night watchman of a new gas well in which Mr. F. is part owner. He is to set up and watch the well every night and sleep daytimes. He is to live in a cabin right on the ground, burn all the gas he needs to keep him warm, comfortable and well lighted, and is to received two dollars per day as compensation. If he is strong and capable enough to do the work, it will be a fine thing for him, and he has accepted the situation, and gone to Stockton today. I have written to Willie. The weather continues exceedingly chilly. (T.S.R. 25. 2 P.M. 44. S.S. 37.)