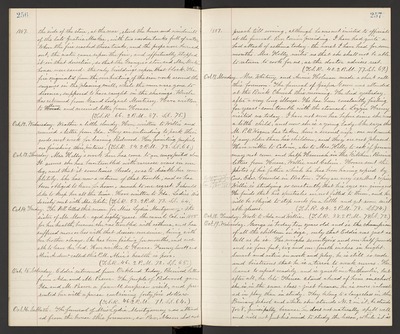 1887. the side of the store, at the near, stood the house and windmill of the late Justice Mecker, with two wooden tanks full of water when the fire reached those tanks, and the props were burned out, the water came upon the fire, and effectually stopped it in that direction, so that the Granger's store and Mrs. Mecker house was saved - the only buildings upon that block. The fire originated from the overheating of the iron work around the engines in the planing mill, while the men were gone to dinner, supposed to have caught in the shavings. Uncle has returned from Grand Lodge at Monterey. Have written to Mary and received letter from Horace. (T.S.R. 66. 2 P.M. 87. S.S. 75.)

Oct. 12. Wednesday. Weather a little cloudy. Have written to Willie and received a letter from Ida. They are intending to pack their goods next week for leaving Redwood. Her painting pupils are finishing their pictures. (T.S.R. 54. 2 P.M. 72. S.S. 66.)

Oct. 13. Thursday. Mrs. Kelly's work here has come to an unexpected close. It seems she has been troubled with varicose veins in one leg, and that it sometimes bleeds, was to disable her completely. She has now a return of that trouble, and so has been obliged to leave for home, much to our regret. I should like to keep her all the time. Have written to Ida. Ladies Aid Society met with Mrs. White. (T.S.R. 52. 2 P.M. 73. S.S. 64.)

Oct. 14. Friday. The bell tolled this morn. for Miss Lydia Montgomery - the sister of Mr. Mont. - aged eighty years. She cane to Cal. in 1855 for her health, because she was trouble with asthma, and has suffered more or less with that disease ever since, living with her brother always. She has been failing for months, and not able to leave her bed. Have written to Horace. Fanny Swett and Alice Andrew called this P.M. Alice's health is poor. (T.S.R. 46. 2 P.M. 72. S.S. 65.)

Oct. 16. Sabbath. The Funeral of Mrs. Lydia Montgomery was attended from the house this forenoon, so Rev. Mason did not

1887. preach till evening, although he was not invited to officiate at the funeral - Rev. Corwin presiding. I have had quite a bad attack of asthma today - the worst I have had for some months. Mrs. Kelly writes us that she shall not be able to return to cook for us, as the doctor advises rest. (T.S.R. 40. 2 P.M. 77. S.S. 69.)

Oct. 17. Monday. Mrs. Whitney and Annie Holman made a short call this forenoon. The funeral of Jasper Green was attended at the Brick Church this morning. He died yesterday, after a very long illness. He has been constantly failing for years - some trouble with the stomach. Lizzie Harvey visited us today. I have not seen her before since she was a little child, and now she is young lady. She says that Mr. P.B. Wagner has taken him a second wife - one not much if any, older than his children, and they are not pleased. Have written to Calvin, also to Mrs. Kelly to ask if Jennie may not come and help Hannah in the kitchen. Received letters from Horace, Willie and Calvin. Horace sent the photos of his father which he has been having copied by Cous. Edw. Gerould in Boston. They are very excellent copies. Willie is studying so constantly that his eyes are giving out. He finds that his spectacles are not fitted to them, and he will be obliged to stop work for a little and get some suitable glasses. (T.S.R. 44. 2 P.M. 78. S.S. 74.)

Oct. 19. Wednesday. George is today ten years old and is the champion of all the children in size, only that Eddie was just as tall as he is. He weighs seventysix and one-half pounds and is four feet, six and one-fourth inches in height. Smart and active in work and play, he is still so rude and boisterous that he is a terror to weak nerves. He learns to repeat readily, and is quick in Arithmetic, but after all, he lets Theresa stand ahead of him in school she is in the same class - just because he is more interested in play than in study. They belong to a large class in the Primary School and while she stands No. 2 in it, he stands 7 or 8, principally because he does not naturally spell well and will not just his mind to study the lesson, while it is