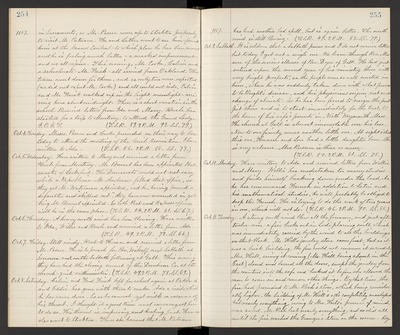 1887. in Sacramento, so Mr. Pascoe came up to Stockton purposely to visit Mr. Putnam. He and Luther went to see him - found him at the Grand Central to which place he has been moved and he is feeling much better - a marked improvement, and we all rejoice. This evening, Mr. Cooke, Calvin and a schoolmate - Mr. Frick - all arrived from Oakland. The team went down for them, and as only two were expected (we did not expect Mr. Cooke) and all could not side, Calvin and Mr. Frick walked up in the bright moonlight - arriving here about midnight. There is a short vacation in the school. Received letters from Ida and Mary. Uncle has started for a trip to Monterey, to attend the Grand Lodge, I.O.G.T. (T.S.R. 59. 2 P.M. 93. S.S. 79.)

Oct. 5. Wednesday. Have written to Mary and received a letter from Uncle from Monterey. Mr. Bruml has been appointed Postmaster of Lockeford. The Democrats could not rest easy while a Republican - Mr. Ambrose - filled that office, so they got Mr. Waterman appointed, and he, having proved a defaulter and "skipped out", they have now succeeded in getting Mr. Bruml appointed. So both Post and Express offices will be in the same place. (T.S.R. 54. 2 P.M. 81. S.S. 67.)

Oct. 7. Friday. Still windy. Wrote to Horace and received a letter from Mr. Pascoe. He is to preach for Rev. Wikoff next Sabbath at Sonoma and on the Sabbath following at Galt. This evening they have had the closing concert of the Dunham Co. at the church - quite enthusiastic. (T.S.R. 49. 2 P.M. 73. S.S. 69.)

Oct. 8. Saturday. Calvin and Fred. Frick left for school again at Oakland and Eddie has gone with them to make Ada a visit, which he has never done. So as he cannot get milk on account of his thumb, I thought it a good time and encouraged him to do so. His thumb is improving and healing fast. Hannah also went to Stockton. There she learned that Mr. Putnam

Oct. 9. Sabbath. It is seldom that a Sabbath passes and I do not received letters but today I got not a single one. We learn through Rev. Mason of the serious illness of Rev. Dyer of Galt. He had just entered upon the second year of his ministry there with very bright prospects, as the people were so well united in him, when he was suddenly taken down with what proves to be Bright's disease, and his physicians enjoin rest and change of climate. So he has been forced to resign the pulpit there and is to start immediately for the East, to the home of his wife's parents in North Weymouth, Mass. The church at Galt is almost inconsolable over his loss. Now to our family comes another little one. At eight o'clock this eve, Howard and Lou had a little daughter born. She is very welcome. Mrs. Russem is there as nurse. (T.S.R. 50. 2 P.M. 81. S.S. 75.)

Oct. 10. Monday. Have written to Ada and received letters from Willie and Mary. Willie has undertaken too many studies and finds himself breaking down under the load. As he has commenced French in addition to Latin and his mathematical studies, he will probably be obliged to drop the French. He is trying to do the work of two years in one, which will not do. (T.S.R. 46. 2 P.M. 90. S.S. 85.)

Oct. 11. Tuesday. A strong south wind blew all the forenoon, and just after twelve-noon - a fire broke out in Lodi planing snill, which was immediately carried by the wind to all the buildings on that block. Mr. Hill's jewelry store came first, but as it was a brick building, the fire could not consume it so readily Mrs. Hill, seeing it coming (Mr. Hill being absent in the East) closed and barred all the doors, swept the jewelry from the counters into the safe and locked it before she allowed the man to come in and remove other things. By that time, the fire had proceeded to Mr. Rich's store, which being considerably higher, the building of Mr. Hill's was completely enveloped but nearly everything, owing to Mrs. Hill's presence of mind, was saved. Mr. Rick lost nearly everything, and so did all until the fire reached the Geanger's Store on the corner. By