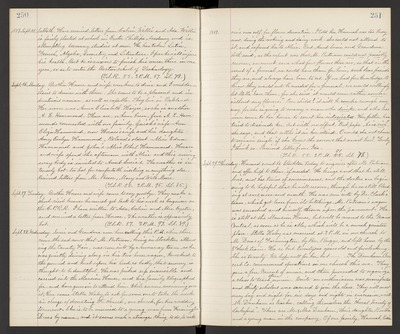 1887. Sept. 25. Sabbath. Have received letters from Calvin, Willie and Ada. Willie is fairly started at school in Exeter Phillips Academy and is attempting too many studies at once. He has taken Latin, French, Algebra, Geometry and Literature. I fear he will injure his health. But he is anxious to finish his course there in one year, so as to enter the Boston school of Technology. (T.S.R. 53. 2 P.M. 87. S.S. 78.)

Sept. 26. Monday. Brother Horace and wife were here to dine and I went down stairs to dinner with them. She seems to be a pleasant and industrious woman, as well as capable. They live in Oakland. Her name was Anna Elisabeth Harjes, so she is another A. E. Hammond. There are, or have been, five A. E. Hammonds connected with our family. Josiah's wife - Ann Eliza Hammond, now Horace's wife and his daughter Amy Evelyn Hammond, Roland's oldest - Alice Edna Hammond and John's - Alice Ethel Hammond. Horace and wife spend the afternoon with Alice and this evening every body is invited to Aunt Susie's. The weather is intensely hot too hot for comfortable visiting or anything else. Received letter from Mr. Pascoe, Mary and Will Moore. (T.S.R. 58. 2 P.M. 95. S.S. 85.)

Sept. 27. Tuesday. Brother Horace and wife came to say goodbye. They make a short visit because he must get back to his work as Engineer on the C.P.R.R. I have written to Ada, Calvin and Mrs. Eyster, and received letter from Horace. The weather is oppressively hot. (T.S.R. 57. 2 P.M. 97. S.S. 89.)

Sept. 28. Wednesday. Susie and Grandma were here calling this P.M. when there came the sad news that Mr. Putnam, being is Stockton attending the Country Fair, was run into by a runaway team, as he was quietly driving along in his two-horse wagon, knocked to the ground and hurt upon his head so badly that recovery is thought to be doubtful. He was picked up insensible and carried into the Mansion House, and his family telegraphed for, and have gone in to attend him. While we were mourning over it, there came Stella Haley, to ask for some one to take the work in charge of decorating the church, our church, for her wedding tomorrow. She is to be married to a young man from Farmington Dreas by name, and it seems such a strange thing to do, to ask

1887. one's own self, for flower decoration. I told her Hannah was too busy now, doing the cooking and daisy-work - she could not attend to it, and referred her to Alice. But Aunt Susie and Grandma both said, as the report was that Mr. Putnam could not possibly recover, we must save what few flowers there are, so that in the event of a funeral, we could have them for him, such dear friends they are, and always have been to us. If we had fore knowledge to know they would not be needed for a funeral, we would willingly let Stella have them, for she said "it would seem rather sombre without any flowers." Poor child! it will be sombre enough any way for she is going to many a man who drinks, and who has even come to her house to court her intoxicated. Her father has tired to dessicade her, but with no effect. "But, papa, he is rich", she says, and that settles it in her mind. O would she not choose to remain single if she knew the sorrows that await her? Truly I think so. Received letter from Ida. (T.S.R. 55. 2 P.M. 91. S.S. 78.)

Sept. 29. Thursday. Howard went to Stockton today to inquire after Mr. Putnam and offer help to them, if needed. He brings word that he still lives, and has times of consciousness, and the doctors are beginning to be hopeful that he will recover, though he is still bleeding at ears, nose and mouth. He was run into by Dr. Clark's team, which got loose from its hitchings, Mr. Putnam's wagon was smashed and himself thrown upon the pavement. He is still at the Mansion House, but will be moved to the Grand Central, as soon as he is able, which will be a much quieter place. Stella Haley was married at 2 P.M. in our church to Mr. Dreas of Farmington, by Rev. Briggs, and left home by the 5 o'clock train. He is but twentyone years old and finelooking. She is twenty. We hope well for her, but . The Dunham Concert Co. commenced operations in one church this eve. They gave a free Concert of music, and then proceeded to organize a class to teach them music. Quite an enthusiasm was manifested and thirty scholars were secured to join the class. They will meet every day and night for six days and nights in succession, with Mr. Dunham as teacher, calling themselves the "Choral Society of Lockeford". There are Mr. & Mrs. Dunham, their daughter Bertha and a young man in the company. Of our family, Hannah, Eddie