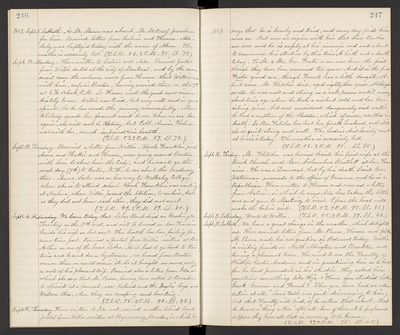 Sept. 12. Monday. Have written to Calvin and Ada. Received postal from Willie dated at the city of Montreal, and by the same mail came the welcome news from Horace that Willie was with him, safe in Boston, having arrived there on the 5th at 8 1/2 o'clock, P.M. So Horace wrote the good news immediately to me. Willie was tired, but very well and in good spirits. So he has made the journey successfully. Mrs. Whitney made her farewell visit to us. When we see her again, she will not be Whitney, but Cobb. Annie Holman was with her, much improved in health. (T.S.R. 53. 2 P.M. 87. S.S. 73.)

Sept. 13. Tuesday. Received a letter from Willie. Uncle Franklin, with Anna and Hattie and Horace, were going around Boston with him to show him the City, and he was to go the next day (7th) to Exeter. N.H. to see about the Academy there. Anna Locke was on her way to Wellesley College where she is to attend school. Uncle Franklin was waiting at Nashua, when Willie passed the Station, to see him, but as they did not know each other, they did not meet. (T.S.R. 49. 2 P.M. 89. S.S. 80.)

Sept. 14. Wednesday. We learn today that Silas Burt died in Washington Territory on the 11th inst. and will be buried in San Francisco beside his wife on Sat. next. His health has been failing for some time past. Received a postal from Willie written at Port Arthur on one of the Great Lakes. As it had to go back to Victoria and be sent down by steamer, we heard from Boston sooner than we could receive it. So it brought no news, only a note of his pleasant trip. Received also a letter from Ida, in which she says that Mr. Pascoe, having been called to Pescadero to officiate at a funeral, saw Roland and the Inglis boys and Wallace there, where they are camping and hunting. (T.S.R. 56. 2 P.M. 90. S.S. 83.)

Sept. 15. Thursday. Have written to Ida and received another behind-hand postal from Willie, written at Pogamasing, Canada, in which he

1887. says that he is lonely and tired, and every day finds him more so. But now we rejoice with him that those troubles are over and he is safely at his journey's end and about to commence his studies by this time. A birth and a death today. To Mr. & Mrs. Geo. Foster a son was born - the first though they have been married ten years. And it is the first Foster grand-son, though Frank has a little daughter About noon, Mr. Fletcher died, aged eightythree years. Although so old, he was well and strong as a well person until a very short time ago, when he took a violet cold and has been oiling since, but not considered dangerously sick until he had a rupture of the bladder, which, of course, resulted in death. So Mrs. Fletcher has lost her fourth husband, and still she is quite strong and well. The Ladies Aid Society met at Susie's today. The weather is excessively hot. (T.S.R. 56. 2 P.M. 95. S.S. 85.)

Sept. 16. Friday. Mr. Fletcher was buried beside his first wife at the Brick Church, and Gov. Columbus Bartlett at San Francisco. He was a Democrat, but by his death, Lieut. Gov. Waterman succeeds to the office of Governor, and he is a Republican. Have written to Horace and received a letter from Calvin, in which he says Ada has taken the little ones and gone to Martinez to visit. I fear the heat will make the babies sick. (T.S.R. 57. 2 P.M. 95. S.S. 81.)

Sept. 18. Sabbath. We have a great change in the weather, which delights us. Have received letters from Mr. Pascoe, Horace and Willie. Mr. Pascoe reads his resignation in Redwood today. Willie is visiting friends in North Abington and Brockton and having a pleasant time. He went to see the Faculty of Phillips Exeter Academy and in questioning him as to how for he had proceeded in his studies, they asked him questions something like this - "Have you studied Latin Greek, German and French?" Then you have had no education at all." Such talk was quite discouraging to him, but that Faculty will find, if he enters that school, that he knows a "thing or two" after all. Some of those N.E. professors suppose they know all that is necessary to be known. (T.S.R. 47. 2 P.M. 75. S.S. 65.)