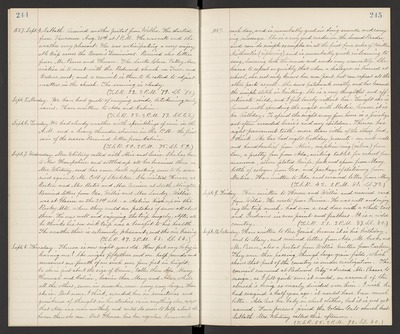 1887. Sept. 4. Sabbath. Received another postal from Willie. He started from Vancouver Aug. 30th at 1 P.M. He was well and the weather very pleasant. He was anticipating a very enjoyable trip across the Queen's Dominions. Received also letters from Mr. Pascoe and Horace. The Santa Clara Valley Association is to meet with the Redwood church on Tues. and Wednes. next, and a council is then to be called to adjust matters in the church. The evening is cloudy. (T.S.R. 52. 2 P.M. 79. S.S. 73.)

Sept. 7. Wednesday. Mrs. Whitney called with Alice and Susie. She has been to New Hampshire and settled up all her business there as Mr. Whitney, and has come back expecting soon to be married again to Mr. Cobb of Stockton. She visited Horace at Boston and Mrs. Bates and Mrs. Winsor at North Abington. Received letters from Ida, Willie and Mrs. Sandoz. Willie was at Glacier on the 31st ult. - a station high up in the Rocky Mts. where they could see patches of snow all about them. He was well and enjoying the trip hugely. After all he thinks his sea-sick trip was a benefit to his health. The weather there is extremely pleasant, and the air bracing. (T.S.R. 47. 2 P.M. 68. S.S. 64.)

Sept. 8. Thursday. Theresa is now eight years old. How fast my baby is leaving me! She weighs fiftythree and one-half pounds and measures one-fourth of an inch over four feet in height. So she is just about the size of Eunice, taller than Ada, Mary, Hannah and Calvin, heavier than Mary and Ada, while all the others, seven in number, were every way larger than she is. But none, I think, exceeded her in smartness and quickness of thought in her studies or in anything else, except that Ada was more motherly and could do more to help about the house than she can. But Theresa has her regular housework

1887. each day, and is remarkably good in doing errands and carrying messages. She is a very good reader in the Second Reader and can do simple examples in all the first four rules of Written Arithmetic (ciphering) and is remarkably quick in learning to sing, learning both the music and words very accurately. She learns to repeat so quickly that when a dialogue is learned at school, she not only knows her own part, but can repeat all the other parts as well. She sews patchwork neatly and has learned the simple stitch in knitting. She is a very thoughtful and affectionate child, and I feel lonely without her. Tonight she is favored with spending the night with Mertice, because it is her birthday. To spend the night away from home is a privilage not often accorded Susie's and my children. Theresa has eight permanent teeth - more than either of the others had, I think. She has had eight birthday presents - an ink-well and handkerchief from Alice, napkins ring (silver) from Lou, a pretty fan from Ada, writing tablet for school from mamma, silver-plated knife, fork and spoon from Mary, bottle of cologne from Geo. and package of stationery from Mertice. Have written to Ida and received letter from Mary. (T.S.R. 42. 2 P.M. 81. S.S. 73.)

Sept. 9. Friday. Have written to Horace and Willie and received card from Willie. He wrote from Irvine. He was well and enjoying the trip much had seen a red deer with a white tail and Indians in war paint and feathers. It is a wild country. (T.S.R. 51. 2 P.M. 87. S.S. 80.)

Sept. 10. Saturday. Have written to Bro. Josiah, because it is his birthday, and to Mary, and received letters from Ada, Mr. Cooke and Mr. Pascoe, also a portal from Willie written from Carbury. They were then passing through large grain-fields, which shows that part of the country is under civilization. The council convened at Redwood City advised Mr. Pascoe to resign, as I felt quite sure it would, on account of the church's being so nearly divided over him. I wish he had resigned a half year ago it would have been much better. Ada has her baby in short clothes, but it is not yet named. Four persons joined the Golden Gate church last Sabbath. Mrs. Whitney called this afternoon. (T.S.R. 55. 2 P.M. 92. S.S. 80.)