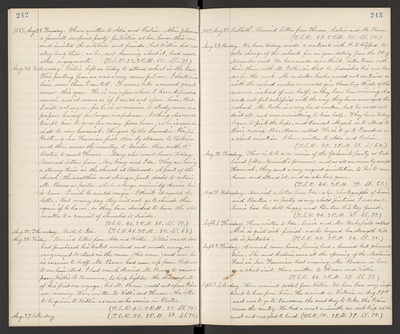 1887. Aug. 23. Tuesday. Have written to Ada and Calvin. Alice planned a farewell surprise party for Willie at her house this eve and invited the relatives and friends, but Willie did not stay long there, as he, not knowing about it, had made other engagements. (T.S.R. 52. 2 P.M. 85. S.S. 71.)

Aug. 24. Wednesday. Willie left us today to attend school in the East. His parting from us was a very sorrowful one. I shall miss him more than I can tell. It seems like a second great sorrow this year. He is one upon whom I have depended much and it seems as if I could not spare him. But I will not say so, for he is so anxious to study more and prepare himself for larger usefulness. Nothing else would tempt him to go so far away from home, as he is sure he shall be very homesick. He goes by the Canadian Pacific Route, - to San Francisco first, then by steamer to Victoria and then across the country to Quebec, then south to Boston to meet Horace. Mary also went home today. Received letters from Mrs. Gray and Ida. They are having a stormy time in the church at Redwood. A part of the church, the wealthier and stronger part desires to retain Mr. Pascoe as pastor, while a large minority desires him to leave. I wish he would resign - I think it would be better. But many say they will not go to church there again if he leaves, so they have decided to leave the whole matter to a council of churches to decide. (T.S.R. 48. 2 P.M. 85. S.S. 71.)

Aug. 26. Friday. Received letters from Ada and Willie. Willie was at Ada's had purchased his ticket overland and made every arrangement to start in the morn. (this morn.) and now he is anxious to be off. Mr. Pascoe had come up from Redwood to see him start. I had much desired Mr. Pascoe to accompany Willie to Vancouver, to help lighten the discomforts of his first sea voyage, but Mr. Pascoe could not spare time nor money. Have written to Willie and Horace - the letter to be given to Willie as soon as he arrives in Boston. (T.S.R. 45. 2 P.M. 81. S.S. 72.)

Aug. 29. Monday. We have today made a contract with A.B. Clifford, to take charge of the orchard for one year dating from the 1st of November next. We have made as we think, better terms with him than with Mr. Cooke, in that he furnishes his own horses for the work. Mr. and Mrs. Cooke would not continue on with the orchard unless we would give them two-thirds of the venue instead of one-half, as they have been receiving. And we do not feel satisfied with the way they have managed the orchard. Mr. Cooke is a very hard worker, but he could not do it all and was unwilling to hire help. They have today began to pick the hops, and Earnest Megerle is to attend to their curing. Rev. Mason called. He is to go to Pescadero on a short vacation I have written to Ada and Calvin. (T.S.R. 47. 2 P.M. 81. S.S. 64.)

Sept. 2. Friday. Hannah came home, having had a hurried but pleasant time. She and Calvin were the opening of the Mechanics Fair in San Francisco last evening. Mrs. Russem is here on a short visit. Have written to Horace and Willie. (T.S.R. 48. 2 P.M. 88. S.S. 77.)

Sept. 3 Saturday. Have received postal from Willie. We have been very impatient to hear from him. He arrived in Victoria on Aug. 29th and was to go to Vancouver the next day to take the train across the country. He had a most miserable sea-sick trip up the coast and was glad to land. (T.S.R. 50. 2 P.M. 79. S.S. 72.)