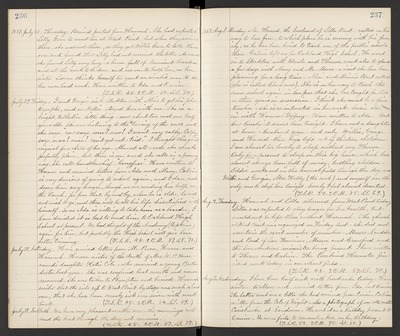 1887. July 28. Thursday. Received postal from Hannah. She had expected Lilly Greve to meet her at West Point, but when they arrived there, she was not there, so they got Willie Greve to take them over and found that Lilly had not received the letter. As usual she found Lilly very busy - a house full of transient boarders and all the work to be done and no one to help her, as her sister Laura thinks herself too great an invalid even to do her own hard work. Have written to Ida and Eunice. (T.S.R. 48. 2 P.M. 80. S.S. 70.)

July 29. Friday. I sent Georgie into Stockton with Alice to get his photographs, and so Nellie stayed here with me. She is a bright, talkative little thing - now about two and one half years old. She was listening to the lowing of the cows and she says, "cow says, moo! moo! I want my calfy, Calfy says maa! maa! can't get out-tied". I thought this quite original for a child of her age. Almost all words she speaks perfectly plain, but there is one word she calls in a funny way. She calls handkerchief - "hangfuss". Have written to Horace and received letters from Ada and Mary. Calvin is very descious of going to school again, and I dare not deny him any longer, though we are needing his help on the Ranch, for fear that, by and by, when he is older, he will not wish to go, and then will be all his life dissatisfied with himself. So as Ada is willing to take him as a boarder, I have decided it is best to send him to Oakland High School at present. We had thought of the Academy (Hopkins) again for him, but probably the High School will give him better training. (T.S.R. 48. 2 P.M. 87. S.S. 72.)

July 30. Saturday. Have received letters from Mr. Pascoe, Horace and Hannah. Horace writes of the death of Mrs. W.P. Hammond's daughter - Katie Cole - who married a young Boston doctor last year. She was confined last month and never recovered. She was taken to Plympton and buried. Hannah writes that the ride up to West Point by stage was such a hard one, that she has been nearly sick ever since with weak back. (T.S.R. 48. 2 P.M. 84. S.S. 69.)

1887. Aug. 1. Monday. Mr. Herrod, the husband of Lilla Burt - called on his way to San Jose, to which place he is moving with his family, as he has been hired to teach one of the public schools there Calvin left us for Oakland High School. He went in to Stockton with Uncle and Theresa went also to spend a few days with Mary and Mr. Moore - a visit she has been planning for a long time. Alice and Minnie Burt called (she is called Clara now). She is on her way to teach the same school again in San Jose that she has taught for two or three years in succession. I think she must be a fine teacher - she is so interested in her work. Susie also came in with Hannah Geffroy. Have written to Ada. But how lonely it seems here tonight. I have not a daughter at home - husband gone and - only Willie, George and Howard - three boys left out of thirteen children. I am almost too lonely to sleep without my Theresa. Only four persons to sleep in this big house, which has almost always been full of noisy, bustling children. Eddie works out in the harvest field through the day, and Willie and Georgie, Mrs. Kelly (the cook) and myself are the only ones to sleep here tonight. Surely I feel almost deserted. (T.S.R. 50. 2 P.M. 85. S.S. 69.)

Aug. 2. Tuesday. Hannah and Lilla returned from West Point today Lilla was expected to stay longer for her health, but would not be left there without Hannah. The church at West Point was organized on Friday last - she did not ascertain the exact number of members - Messrs. Scudder and Pond of San Francisco, Mason and Crawford and the San Andreas minister being present. I have written to Theresa and Calvin. The Combined Harvester finished work today in our wheat field. (T.S.R. 48. 2 P.M. 87. S.S. 75.)

Aug. 3. Wednesday. I have been half sick with headache today. Have written to Mary and received letters from Ida and Eunice. The latter sent me a letter she had received from Cousin Calvin written from the Isle of Wight - also a photograph of an old castle Carisbrooke at Sandown. He sent it as a birthday present to Eunice. He never fails to remember her on her birthday. (T.S.R. 52. 2 P.M. 95. S.S. 80.)