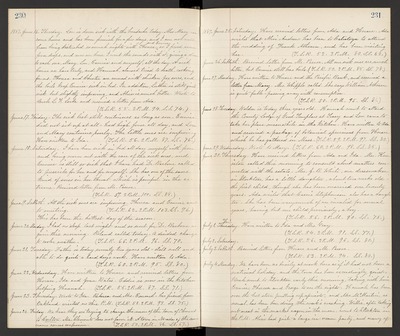 1887. June 16. Thursday. Lou is down sick with the headache today. Also Mary has come home and has been feverish for a few days, and I am not well from being disturbed so much nights with Theresa and Eunice so I fixed some fever drops, and once on hour I went the sounds with it, giving a dose to each one, Mary, Lou, Eunice and myself, all the day. A sick house we have truly, and Hannah, almost tired to death, cooking for us. Theresa and Chester are covered with chicken-pox sores, and the boils keep Eunice sick in bed. In addition, Luther is still quite sick but slightly improving, and Alice is much better. Wrote to Uncle L.F. Locke and received a letter from Ada. (T.S.R. 55. 2 P.M. 94. S.S. 74.)

June 18. Saturday. I have been sick in bed all day myself with fever and being worn out with the care of the sick ones, and Eunice is still so sick that I have had Dr. Barbour called to prescribe for her and for myself. She has one of the same kind of sores in her throat which is painful in the extreme. Received letter from Mr. Pascoe. (T.S.R. 57. 2 P.M. 100. S.S. 88.)

June 28. Tuesday. Weldon is today three years old. Hannah went to attend the Country Lodge of Good Templars at Tracy and Lou came to take her place meanwhile in the kitchen. Have written to Ada and received a package of botanical specimens from Horace which he has gathered in Mass. (T.S.R. 59. 2 P.M. 97. S.S. 80.)

June 30. Thursday. Have received letters from Ada and Ida. Mr. Keniston called this morning to consult about matters connected with the estate. Mrs. J.B. White, our dressmaker in Stockton, has a little daughter, about two weeks old - the first child, though she has been married over twenty years. Ada writes that Carrie Stephenson also has a daughter. She has been very much of an invalid for several years, having but one child previously, a boy. (T.S.R. 56. 2 P.M. 90. S.S. 75.)

July 4. Monday. We have been as busily at work here as if it had not been a national holiday, and the town has been exceedingly quiet. Uncle went to Stockton early this morning, taking with him Eunice, Theresa and George to see the sights. Hannah has been over the hot stove putting up apricots, and Mrs. McMartin, as usual, has been her doing the week's washing. Willie, after taking out meat in the market wagon in the morn. went to Stockton in the P.M. Alice had quite a large ice-cream party, and many of