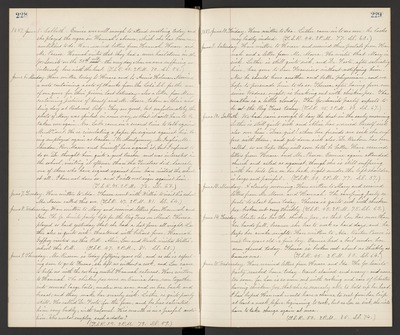 1887. June 5. Sabbath. Eunice was well enough to attend meeting today and she played the organ in Hannah's absence, which she has been very ambitious to do. Have received letters from Hannah, Horace and Mr. Pascoe. Hannah writes that they had a severe hail storm in the Yo-Semite on the 30th ult. - the very day when we were suffering so intensely here with the heat. (T.S.R. 45. 2 P.M. 70. S.S. 56.)

June 6. Monday. Have written today to Horace and to Annie Holman. Received a note containing a vote of thanks from the Lodi S.S. for the use of our grove for their picnic last Saturday - also a letter from Mary containing pictures of herself and Mr. Moore, taken on their wedding day at Redwood City. They are good, but unfortunately the photo of Mary was spoiled in some way, so that it will have to be taken over again. Geo. Locke came in a second time to talk against Mr. McCourt. He is circulating a paper for signers against his being employed again as teacher. Mr. Montgomery, Mr. Puglis, Mr. Sherden, Rev. Mason and himself have signed it, but I refused to do so. Dr. thought him quite a good teacher and was interested in the school, visiting it oftener than the Trustees did. Scarcely one of those who have signed against him have visited the school at all. I have not done so, and I will not sign against him. (T.S.R. 45. 2 P.M. 73. S.S. 63.)

June 8. Wednesday. Have written to Mary and received letters from Hannah and Ida. The Yo-Semite party left for the Big Trees on Mond. Theresa played so hard yesterday that she had a hot fever all night. Luther also is quite sick - threatened with bilious fever. Hannah Geffroy visited us this P.M. Alice, Lou and Uncle visited Willie's school this P.M. (T.S.R. 47. 2 P.M. 81. S.S. 65.)

June 9. Thursday. Mrs. Russem is today fiftysix years old, and as she is expecting soon to go to Fresno, she left us without a cook, and Lou came to help us with the cooking until Hannah returns. Have written to Hannah. The chicken pox sores on Eunice have run together into several large boils, under one arm and on her back and breast, and they make her nearly sick. Luther is quite poorly still. He called Dr. Foote for the fever, and he has salivated him very badly, with calomel. This mouth is in a fearful condition. Who would employ such a doctor? (T.S.R. 52. 2 P.M. 79. S.S. 59.)

June 11. Saturday. Have written to Horace and received three postals from Hannah and a letter from Mr. Moore. He writes that Mary is sick. Luther is still quite sick, and Dr. Foote, after salivating him, has gone to San Francisco without notifying him. Now he should have another and better physician, and we hope to persuade him to do so. Theresa, after having fever ever since Wednes. night, is breaking out with chicken pox. The weather is a little cloudy. The Yo-Semite party expects to be at the Big Trees today. (T.S.R. 45. 2 P.M. 80. S.S. 67.)

June 12. Sabbath. We had rain enough to lay the dust in the early morning Luther is still quite sick and Alice has worried herself sick also over him. Dear girl! when her friends are sick she suffers with them, and gets down sick also. Dr. Barbour has been called, so we hope they will soon both be better. Have received letters from Horace and Mr. Pascoe. Eunice again attended church and acted as organist, though she is still suffering with her boils. One on her back, right under the left shoulder, is large and painful. (T.S.R. 50. 2 P.M. 77. S.S. 57.)

June 13. Monday. A cloudy morning. Have written to Mary and received letters from Mr. Moore and Hannah. The camping party expects to start home today. Theresa is quite sick with chicken pox - broken out very thickly. (T.S.R. 45. 2 P.M. 75. S.S. 63.)

June 14. Tuesday. Chester also has the chicken pox, so that Lou has more than her hands full, because she has to work so hard days, and he keeps her awake nights. Have written to Ada. Benton Pascoe is now two years old - a fine boy. Eunice had a boil under her arm opened today. Theresa is broken out about as thickly as Eunice was. (T.S.R. 45. 2 P.M. 80. S.S. 64.)

June 15. Wednesday. Have received letters from Horace and Ida. The Yo-Semite party reached home today - travel - stained and weary - and none too soon, for Lou is so worn out with cooking and care of Chester having chicken pox, that she is scarcely able to hold up her head. I had hoped Hannah would have a chance to rest from her trip at last a week before beginning to cook, but as Lou is sick, she will have to take charge again at once. (T.S.R. 50. 2 P.M. 85. S.S. 74.)