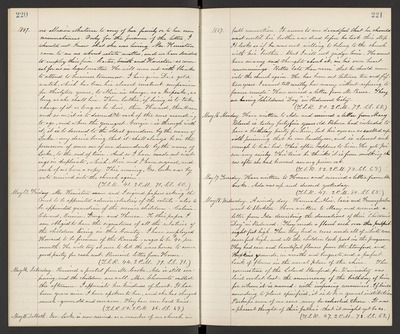 1887. no allusion whatever to any of her family or to her own circumstances. Only for the presence of the letter, I should not know that she was living. Mr. Keniston came to see us about estate matters, and we have decided to employ their firm - Carter, Smith and Keniston - as counsel for us in legal matters. He will come out with blanks to attend to business tomorrow. I have given Dr.'s gold watch, which has been his almost constant companion for thirtytwo years, to Alice in charge, as a keepsake, as long as she shall live. Then Luther, if living is to take charge of it as long as he lives, then Howard, then Horace and so on; it is to descend to each of the sons according to age, and when the youngest - Georgie - is through with it, it is to descend to the oldest grandson by the name of Locke - my desire being that it shall always be in the possession of some one of one descendants by the name of Locke, to the end of time. And so I have made out writings in duplicate, which Alice and I have signed, and each of us have a copy. This evening, Geo. Locke was by note received into the church again. (T.S.R. 41. 2 P.M. 71. S.S. 60.)

May 13. Friday. Mr. Keniston came and I signed papers asking the Court to be appointed administratrix of the estate - also to be appointed guardian of the minor children - Calvin, Edward, Eunice, George and Theresa. To this paper I am obliged to have the signatures of all the relatives of the children living in this Country. I have employed Howard to be foreman of the Ranch - wages to be $40. per month. He will try at once to let the warehouse to some good party for cash rent. Received letter from Horace. (T.S.R. 44. 2 P.M. 79. S.S. 71.)

May 14. Saturday. Received a postal from Mr. Cooke. Ada is still improving, and the children are well. Mrs. Clements called this afternoon. I appreciate her kindness of heart. It has been years since I have spoken to her, and she has changed much - grown old and care worn. They have seen hard times. (T.S.R. 50. 2 P.M. 86. S.S. 69.)

May 15. Sabbath. Geo. Locke is now received as a member of our church in

1887. full connection. It seems to me dreadful that he should wait until his brother was dead before he took this step. It looks as if he was not willing to belong to the church with his brother. But I will not judge him. He must have many sad thoughts about it, in his own heart communings. "Better late than never" that he should come into the church again. He has been out between ten and fifteen years - I cannot tell exactly how many without referring to former records. Have received a letter from Mr. Pascoe. They are having "Childrens' Day" in Redwood City. (T.S.R. 50. 2 P.M. 79. S.S. 68.)

May 16. Monday. Have written to Ada and received a letter from Mary. Roland is today fortyfive years old. Rebecca had intended to have a birthday party for him, but his eyes are so dwelled up with poisoning that he can hardly see, and is almost sick enough to be in bed. This often happens to him. He gets poison very easily. This time he thinks it is from milking the cow after she had browsed among poison oak. (T.S.R. 52. 2 P.M. 73. S.S. 63.)

May 18. Wednesday. A windy day. Hannah, Alice, Susie and Fanny Weber went to Stockton. Have written to Mary and received a letter from Ida describing the decorations of their "Children's Day" in Redwood. They made a floral arch over the pulpit eight feet high. Then they had a cross made all of white roses seven feet high, and all the children took part in the programme. They had rare and beautiful flowers from the Stanford and Hopkins grounds, in wreaths and bouquets, and a perfect bank of flowers in the usual place of the choir. The cornerstone of the Leland Stanford, Jr. University was laid on Sat. last - the anniversary of the birthday of him for whom it is named - with imposing ceremonies. If built according to plans specified, it is to be a grand institution. Perhaps some of our sons may be schooled there. It was a pleasant thought of their father's that it might yet be so. (T.S.R. 47. 2 P.M. 72. S.S. 63.)