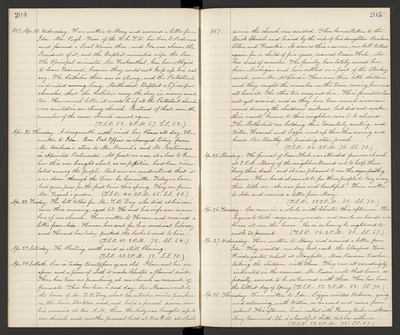 1887. Apr. 20. Wednesday. Have written to Mary and received a letter from Ida. Mrs. Pugh - Treas. of the W.C.T.U. has been to Redwood and formed a Local Union there, and Ida was chosen the President of it, and the Baptist minister's wife the Sec. The Episcopal minister, Rev. Fackenthal, has been obliged to leave Redwood, because they could not keep up his salary. The Catholics there are so strong, and the Protestants so divided among Cong. Methodist, Baptist & Episcopal churches, that the Catholics carry the day in money matters. How much better it would be if all the Protestant churches were united in one strong church. Instead of that, even the members of the same church cannot agree. (T.S.R. 52. 2 P.M. 67. S.S. 52.)

Apr. 21. Thursday. A disagreeable north wind has blown all day. Have written to Ida. Our Post Office is changed today from Mr. Ambrose's store to Mr. Bruml's and Mr. Waterman is appointed Postmaster. At first we were at a loss to know how this was brought about, as no petition had been circulated among the people. But now we understand that it was done through the Dem. Co. Committee. Today we have had green peas for the first time this spring. They are from Mrs. Fogark's garden. (T.S.R. 40. 2 P.M. 65. S.S. 60.)

Apr. 22. Friday. The bell tolled for Mr. T.B. Day who died at his residence this morning, aged 68. He and his wife are members of our church. Have written to Horace and received a letter from Ada. Horace has sent for his medical library and Howard has today packed the books to send to him. (T.S.R. 42. 2 P.M. 72. S.S. 64.)

Apr. 24. Sabbath. Lou is today twentyfour years old. I have sent her an apron and a piece of cloth to make Chester a flannel suit. There has been no preaching at our church on account of funerals. This has been a sad day. Rev. Mason went to the house of Mr. T.B. Day, about ten or twelve miles from here on the lower Stockton road, and held a funeral service over his remains at ten A.M. then the body was brought up to our church and another funeral held at two P.M. at which

1887. service the church was crowded. Then he was taken to the Brick Church and buried by the side of his daughters - Barbara, Ellen and Frankie. As soon as this was over, our bell tolled again for a child of five years, named Bessie Hale, who has died of measles. The family have lately moved here from Michigan and have settled on a part of the Starkey ranch, near Mrs. McCloud's. There were three little children and they caught the measles on the train coming here and all have it. The other two may not live. Their furniture has not yet arrived, and so they have been much inconvenienced during the childrens' sickness, but did not make their wants known to their neighbors, so as to be relieved. The Methodists are holding their Quarterly meeting, and Willie, Hannah and Lizzie went up there this evening and heard Rev. Bentley, the presiding elder, preach. (T.S.R. 46. 2 P.M. 78. S.S. 70.)

Apr. 25. Monday. The funeral of Bessie Hale was attended from our church at 2 P.M. Many of the neighbors turned out to help them "bury their dead" and it was pleasant to see the sympathy shown. How hard it must be for these people to lay away their little one - she was fair and beautiful! Have written to Ada and received a letter from Mary. (T.S.R. 50. 2 P.M. 80. S.S. 70.)

Apr. 27. Wednesday. Have written to Mary and received a letter from Ida. They visited, one day last week, the Stanford Free Kindergarten school at Mayfield, - Miss Ransom teacher - taking the children with them. They were all exceedingly interested in the exercises. Mr. Pascoe wrote that Susie, especially, seemed to be entranced with them. This has been the hottest day of Spring. (T.S.R. 52. 2 P.M. 82. S.S. 70.)

Apr. 28. Thursday. Have written to Ida. Lizzie visited Rebecca, going and returning with Willie, as he went and came from school. This afternoon, Susie called with Fanny Weber and Horace's Amy Hammond. She is a beautiful child, but has asthma. (T.S.R. 53. 2 P.M. 75. S.S. 57.)