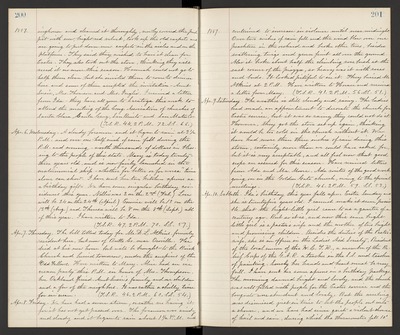 1887. and cleaned it thoroughly, newly covered the pulpit with new, bright red velvet, took up the old carpets and are going to put down new carpets in the aisles and on the platform. They said they wished to have it clean for Easter. They also took out the stove, thinking they will need it no more this season. Hannah could not go to help them clean, but she invited them to come to dinner here and some of them accepted the invitation - Aunt Susie, Mrs. Thomson and Mrs. Inglis. I received a letter from Ida - they have all gone to Saratoga this week to attend the meeting of the Cong. Association of churches of Santa Clara, Santa Cruz, San Benito and San Mateo Cos. (T.S.R. 44. 2 P.M. 72. S.S. 66.)

Apr. 6. Wednesday. A cloudy forenoon and it began to rain at 3- P.M. and over one-half inch of rain fell during the P.M. and evening - worth thousands of dollars in blessing to the people of this state. Mary is today twenty-three years old, and is now fairly launched in the matrimonial ship - whether "for better or for worse" time alone can show. I have sent her two kitchen aprons as a birthday gift. We have some singular birthday coincidences this year. Nellie was 2 on the 2nd (Feb.) Lou will be 24 on the 24th (April) Eunice will be 13 on the 13th (Aug.) and Theresa will be 8 on the 8th (Sept.) all of this year. I have written to Ida. (T.S.R. 47. 2 P.M. 70. S.S. 57.)

Apr. 7. Thursday. The bell tolled today for Mr. D.L. Atkins, formerly resident here, but now of Butte Co. near Oroville. He died at his new home but will be brought to the Brick Church and buried tomorrow, under the auspices of the Odd Fellows. Have written to Mary. Alice had an ice cream party this P.M. in honor of Mrs. Thompson, her Oakland friend. Aunt Susie's family and our children and a few of the neighbors. It was rather a chilly time for ice cream. (T.S.R. 46. 2 P.M. 60. S.S. 54.)

Apr. 8. Friday. We have had a severe storm, or rather are having it, for it has not yet passed over. The forenoon was windy and cloudy and it began to rain about 1- P.M. and

1887. continued to increase in violence until near midnight. Over two inches of rain fell and the wind blew over one peachtree in the orchard and broke other trees, besides scattering twigs and green fruit all over the ground. Also it broke about half the climbing rose bush at the east corner of the piazza, so heavy was it with roses and buds. It looked pitiful to see it. They buried Mr. Atkins at 2 P.M. Have written to Horace and received a letter from Mary. (T.S.R. 41. 2 P.M. 56. S.S. 51.)

Apr. 9. Saturday. The weather is still cloudy and rainy. The ladies had made an appointment to decorate the church for Easter service, but it was so rainy, they could not do it. However, they got the stove set up again, thinking it would be too cold in the church without it. We have had more than three inches of rain during this storm, certainly more than we could have asked for, but it is very acceptable, and all feel now that good crops are assured for this season. Have received letters from Ada and Mr. Moore. Ada writes of the good work going on in the Golden Gate church, owing to the special meetings. (T.S.R. 46. 2 P.M. 59. S.S. 53.)

Apr. 10. Sabbath. Ida's birthday this year falls upon Easter Sunday and she is twentyfive years old. I cannot make it seem possible that the bright little girl came to us a quarter of a century ago. But so it is, and now this same bright little girl is a pastor's wife and the mother of two bright and promising children. Besides the duties of the Pastor's wife, she is an officer in the Ladies Aid Society, President of the local union of the W.C.T.U., a member of the Relief Corps of the G.A.R. a teacher in the S.S. and teacher of painting. Surely her hands and heart must be very full. I have sent her some aprons in a birthday package. The morning dawned bright and lovely, and the church was well filled with people for the Easter service and the bouquets were abundant and lovely. But the meeting was dismissed just in time to let the people out into a shower, and we have had since quite a violent shower of hail and rain, during which the thermometer fell 10-