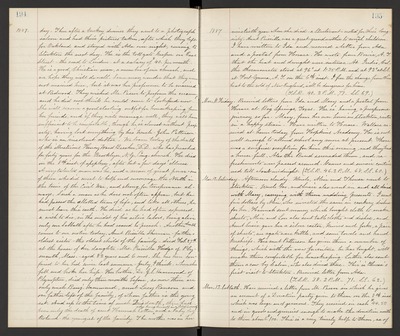 1887. day. Then after a turkey dinner they went to a photograph saloon and had their pictures taken, after which they left for Oakland and stayed with Ada over night, coming to Stockton the next day. He is the toll gate keeper on East Street - the road to Linden - at a salary of $40. per month. He is a good, Christian man, a member of our church, and we hope they will do well. Some may wonder that they were not married here, but it was her preference to be married at Redwood. They wished Mr. Pascoe to perform the ceremony and he did not think he could come to Lockeford now. She will receive a good starting outfit for housekeeping from her friends, and if they will manage well, they will have sufficient to be comfortable, though he is almost without property, having lost everything by his Uncle - John Patterson - who is an insolvent debtor. We learn today of the death of the illustrious Henry Ward Beecher, D.D - who has preached for forty years for the Brooklyn, N.Y. Cong. church. He died on the 8th inst. of apoplexy, after but a few days' illness. A very talented man was he, and a man of great power - one of those who did most to help and encourage the North in the time of the Civil War, and strong for temperance always. Such a man as he does not often appear, but he had passed the allotted term of life, and like all others, he must leave this earth. He died as he had often expressed a wish to die, in the midst of his active labors, being alive only one Sabbath after he had ceased to preach. Another death comes to our notice today. Aunt Priscilla Sherman - father's oldest sister - the oldest child of the family - died Feb. 27th at the house of her daughter - Mrs. Priscilla Hedge of Plymouth, Mass. - aged 82 years and 6 mos. She has been confined to her bed since last summer - July, I think - when she fell and broke her hip. Her brother, Dr. J.S. Hammond of Plympton, died only three months before, so now there are only uncle Benj. Hammond, aunt Lucy Ransom and our father left of the family, of whom father is the youngest. And up to the time of uncle Dr.'s death, there had been only the death of aunt Hannah Cotton who hung herself in a fit of insanity and a baby boy - Roland - the youngest of the family. The mother was in her

1887. ninetieth year when she died - a Sturtevant - noted for their longevity. Aunt Priscilla was a great-grandmother to several children. I have written to Ida and received a letter from Ada and a postal from Horace. Her wrote from Bowie, A.T. that the heat and drought were intense. At Indis, Cal. the thermometer stood at 96- at 1:35 P.M. and at 92- at S.S. at Fort Yuma, A.T. on the 6th inst. I fear the change from this heat to the cold of New England, will be dangerous for him. (T.S.R. 48. 2 P.M. 77. S.S. 69.)

Mar. 11. Friday. Received letters from Ida and Mary and a postal from Horace at Big Springs, Texas. He is having a prosperous journey so far. Mary, from her own home in Stockton, writes in a happy strain. Have written to Horace. Wallace arrived at home today from Hopkins Academy. He is not well enough to attend school any more at present. There was a surprise reception for him this evening, and they had a house-full. Also the Band serenaded them, and refreshments were passed around. Games and music continued till about midnight. (T.S.R. 46. 2 P.M. 68. S.S. 60.)

Mar. 12. Saturday. Afternoon cloudy. Uncle, Alice and Theresa went to Stockton. Uncle Geo. and Susie also went in and all dined with Mary, carrying with them wedding presents. I sent five dollars by Alice, who invested the same in crockery dishes for her, Hannah sent money which bought cloth to make sheets, Alice and Lou also sent table cloths and dishes, and Aunt Susie gave her a silver castor, knives and forks, a pair of sheets, an agate ware kettle, and some towels and handkerchiefs. His aunt Patterson has given them a number of things, which with the new furniture he has bought, will make them comfortable for housekeeping. Luther also sent them a cow by Calvin, who also dined there. This is Theresa's first visit to Stockton. Received letter from Ada. (T.S.R. 38. 2 P.M. 71. S.S. 62.)

Mar. 13. Sabbath. Have received a letter from Mr. Pascoe in which he gives an account of a Donation party given to them on the 8th inst. which was large and generous. They received in cash $44.50 and in goods and groceries enough to make the donation worth to them about $100. This is a very timely help to them, as of