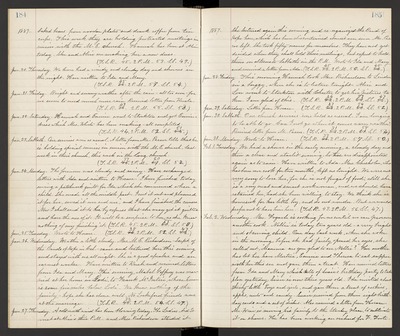 Jan. 24. Monday. The forenoon was cloudy and rainy. Have exchanged letters with Ada and written to Horace. I have finished today sewing a patchwork quilt for Ida which she commenced when a child. She made all the middle part I cut it out and planned it for her, sewed it "over and over", and I have finished the corners. Now I shall send it to her by express that she may get it quilted and have the use of it. It will be a surprise to her, as she knew nothing of my finishing it. (T.S.R. 45. 2 P.M. 55. S.S. 50.)

Jan. 26. Wednesday. Weather a little cloudy. Mrs. M.E. Richardson-Supt. of the Bands of Hope in Cal.- came and lectured here this evening and stayed with us all night. She is a good speaker and an earnest worker. Have written to Uncle and received letters from Ida and Mary. This evening, Mabel Geffroy was married at her home in Lodi, to Frank McIntire, whose home is some five miles below Lodi. We know nothing of the family - hope she has done well. No Lockeford friends were at the marriage. (T.S.R. 32. 2 P.M. 54. S.S. 47.)

Jan. 27. Thursday. A cold north wind has been blowing today. The Ladies Aid So met at Alice's this P.M. and Mrs. Richardson attended it.

1887. She lectured again this evening and re-organized the Band of Hope here, which has been discontinued almost ever since Mr. Pascoe left. She took fifty names for members. They have not yet decided when they shall hold their meetings, but expect to hold them on alternate Sabbaths in the P.M. Wrote to Ida and Mary and received a letter from Ada. (T.S.R. 45. 2 P.M. 50. S.S. 45.)

Feb. 1. Tuesday. We had a shower in the early morning, a cloudy day and then a clear and starlit evening. So we are disappointed again as to rain. Have written to Ada. Mrs. Chesholm, who has been our cook for two months, left us tonight. We were not very sorry to lose her, for she is not frugal of food; still she is a very neat and smart workwoman, and we should have retained her, had she been willing to stay. We think she is homesick for her little boy, and do not wonder. But we would prefer not to have him here. (T.S.R. 43. 2 P.M. 56. S.S. 47.)

Feb. 2. Wednesday. Mrs. Fogarle is cooking for us until we can procure another cook. Nellie is today two years old - a very bright and observing child. One day last week, when she woke in the morning, before she had fairly opened her eyes, she called out, "Mamma are you glad to see Nellie?" Her mother has let her have Mertice, Eunice and Theresa to eat supper with her this eve and gave them a treat. Have received letters from Ida and Mary which tells of Susie's birthday party to take place yesterday. Susie is now three years old. Ida invited about thirty little boys and girls, and gave them a treat of cookies, apples, nuts and candy. Susie received from them eight birthday cards and a set of dishes. Also received a letter from Horace. Mr. Wise is moving his family to the Stanley place, to cultivate it on shares. He has been working an orchard for F. Forti.