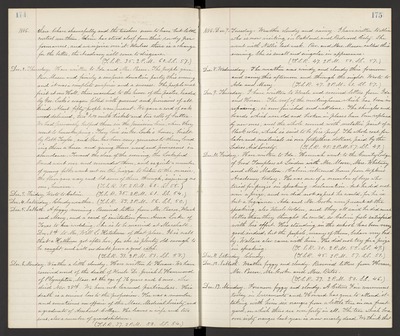 1886. there behave shamefully and the teachers seem to have but little control over them, Calvin has stood aloof from their rowdy performances, and we rejoice over it. Unless there is a change for the better, the Academy will come to disgrace. (T.S.R. 35. 2 P.M. 60. S.S. 57.)

Dec. 2. Thursday. Have written to Ida and Mr. Pascoe. The people gave Rev. Mason and family a surprise donation party this evening and it was a complete surprise and a success. The people met first at our Hall, then marched to the house of the pastor, headed by Geo. Locke's wagon filled with groceries and provisions of all kinds. About fifty people were present. We gave a cord of oak wood delivered, two $1.00 milk tickets and two rolls of butter. We had previously helped them in the provision line, when they went to housekeeping. They live in Geo. Locke's house, built by Robt. Taylor, and Geo. has been very generous to them, lending them a horse and giving them wood and provisions in abundance. Toward the close of the evening the Lockeford Band went over and serenaded them, and as quite a number of young folks went out on the piazza to listen to the music, the floor gave way and let some of them through, injuring no one, however. (T.S.R. 35. 2 P.M. 60. S.S. 55.)

Dec. 5. Sabbath. A foggy morning. Received letters from Mr. Pascoe, Uncle and Mary, and a card of invitation from Anna Locke of Texas to his wedding. She is to be married at Marshall, Dec. 8th to Mr. Will L. Ketchum of that place. It is well that a Ketchum got after her, for she is plenty old enough to be caught, and will no doubt prove a good catch. (T.S.R. 31. 2 P.M. 51. S.S. 53.)

Dec. 6. Monday. Weather a little cloudy. Have written to Horace. We have received word of the death of Uncle Dr. Josiah S. Hammond of Plympton, Mass. at the of 76 years and 6 mos. who died Nov. 28th. We have not learned particulars. His death is a serious loss to the profession. He was a member and sometimes an officer of the Mass. Medical Society, and a graduate of Amherst College. He leaves a wife and two sons, also a number of grandchildren. (T.S.R. 37. 2 P.M. 58. S.S. 54.)

Dec. 9. Thursday. I have written to Uncle and received letters from Ida and Horace. The roof of the meeting house which has been in repairing, is now finished and well done. The shingles and boards which were old and broken in places have been replaced by new ones, and the whole covered with metallic paint of a black color, which is said to be fire-proof. The whole cost for labor and materials is over fortythree dollars, paid by the Ladies Aid Society. (T.S.R. 45. 2 P.M. 57. S.S. 49.)

Dec. 10. Friday. Have written to Ida. Hannah went to the County Lodge of Good Templars at Linden with Mr. Moore, Mrs. Whitney and Miss Mallon. Calvin returned home from Hopkins Academy today. He was one of a number of boys who tried for prizes in speaking-declamation- but he did not win a prize, and we did not expect he would, for he is but a beginner. Ada and Mr. Cooke were present at the speaking, also Uncle Holden, and they all said he did much better than they thought he could, so Calvin feels satisfied with his effort. His standing in the school has been very good indeed, but the pupils, many of them, behave very badly, Wallace also came with him. He did not try for a prize in speaking. (T.S.R. 30. 2 P.M. 55. S.S. 49.)

Dec. 13. Monday. Forenoon foggy and cloudy. A Citrus Fair commences today in Sacramento and Howard has gone to attend it taking with him six oranges from a little tree in our front yard, on which there are over forty in all. The tree which bore over sixty oranges last year is now nearly dead. We think that