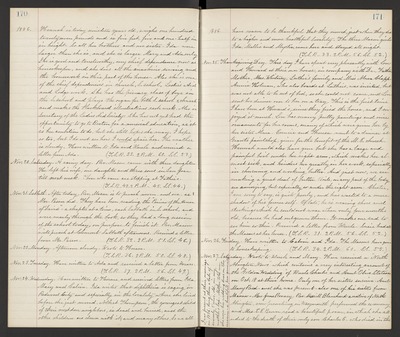 1886. Hannah is today nineteen years old, weighs one hundred twenty seven pounds and is five feet, five and one-half in. in height. So all her brothers and one sister - Ida - were larger than she is, and she is larger Mary and Ada only. She is good and trustworthy, my chief dependence now as housekeeper, and she does all the machine sewing and the housework in this part of the house. Also she is one of the chief dependencies in church, S. school, Ladies Aid and Lodge work. She has the primary class of boys in the S. school and plays the organ for both S. School & church and makes the blackboard illustrations each week. Also is Secretary of the Ladies Aid Society. She has not yet had the opportunity to go to Boston for musical education, as it is her ambition to do, but she still hopes she may. I hope so too, but I do not see how I could spare here. The weather is cloudy. Have written to Ida and Uncle and received a letter from Ada. (T.S.R. 33. 2 P.M. 60. S.S. 53.)

Nov. 21. Sabbath. After today, Rev. Mason is to preach morn. and eve. as Mr. Pascoe did. They have been reading the "Prince of the House of David" - a chapter at a time, each Sabbath in S. school, and were nearly through the book, so they had a long session of the school today, on purpose to finish it. Rev. Mason will preach at Clement Sabbath afternoons. Received a letter from Mr. Pascoe. (T.S.R. 32. 2 P.M. 51.S.S. 46.)

Nov. 24. Wednesday. Have written to Horace, and received letters from Ida, Mary and Calvin. Ida writes that diphtheria is raging in Redwood City and especially in the locality where she lived before she just moved. Albert Thompson, the youngest child of their next door neighbors, is dead and buried, and the other children are down with it, and many others, So we all

Nov. 25. Thanksgiving Day. This day I have spent very pleasantly with Lou and Howard at their own house, in company with Dr., Father, Mother, Mrs. Whitney, Luther's family and Miss Alwen Clapp. Annie Holman, who also boards at Luther's, was invited, but was not able to be out of bed, so she could not come, and Lou sent her dinner over to her on a tray, This is the first time I have been at Howard's, since they fixed the house, and I enjoyed it much. Lou many pretty paintings and nice ornaments for her rooms, many of which were given her by her sister Alma. Eunice and Theresa went to a dinner at Grant's paintshop, given for the benefit of the M.E. church. Hannah would also have gone but she has a large and painful boil under her sight arm, which makes her almost sick, and hinders her greatly in her work, especially in charming and working butter. And just now, we are making a great deal of butter Boils, on any part of the body are annoying but especially so under the right arm. Chester, I am sorry to say, is quite poorly, and has wasted to a mere shadow of his former self. Of late, he is wearing shoes and stockings which he could not wear when only four months old, because he had outgrown them. It makes me sad to see him so thin. Received a letter from Uncle. Susie had all the Masons as her house (T.S.R. 31. 2 P.M. 56. S.S. 52.)

Nov. 27. Saturday. Wrote to Uncle and Mary. Have received a "North Abington News" which contains a very interesting account of the "Golden Wedding" of Uncle Charles and Aunt Olive Stetson on Oct. 18 as their home. Only one of her sisters survive. And Mary Reed - and she was present also one of his sisters from Maine - Mrs. Jane Bonney. Rev. Merrill Blanchard a native of North Abington, now preaching in Weymouth performed the ceremony and Mrs. E. E. Brown read a beautiful poem, in which she attended to the death of their only son Charles E. who died in the

I was present at their marriage in 1836, being then a babe of scarcely 5 mos. old, in my mother's lap. Mother told me she wore her wedding dress on the occasion - a beautiful pea green silk